Home Health Sierra Leone: How One Woman fought back ebola in a town of 36,000
HealthNews & PoliticsPeople

Sierra Leone: How One Woman fought back ebola in a town of 36,000

Hajia Aisha Isatu Daramy Kabia, a nurse and a Muslimah single-handedly led the fight against ebola in a town of 36,000 people, she was an ebola first responder weeks before help came to Lunsar, in Northern Sierra Leone. 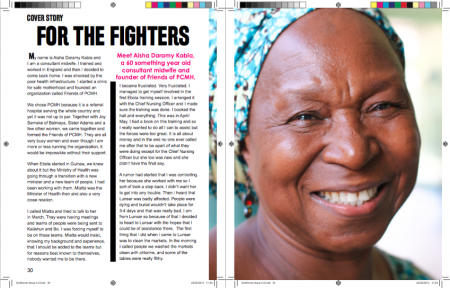 “We dealt with 63 quarantined houses in total. We gave them wood, coal, water, fish, everything that makes a proper meal. We gave them supplies once a week depending on the household.
Everyday for 21 days, we would visit these households to take their temperature. So if we had 10 quarantined houses, we went to those 10 houses everyday until the 21 days were over and that helped us to manage the disease. We were able to take people out and the only reason why so many people died is that we did not have the capacity to treat.

The lesson that I learnt during this whole ordeal is to listen to people. When Ebola came to Lunsar people were saying it was witchcraft. Some said a witch plane crashed. They were saying that it was a curse. But they were dismissed completely and people did not listen to them or take them seriously. Some of them were even fined because they said that it was witchcraft.

What I learned was that we have to learn to listen to people. Even when it sounds like rubbish, listen. It may not have been witchcraft but something terrible was happening and if people had paid attention, we might have been able to deal with it sooner rather than later.”

HOW TO GET GOWOMAN MAGAZINE

Buy your copy of GoWoman  at these locations in #SierraLeone

Buy your  of GoWoman in Ghana

Sierra Leone Sports: The case of the ‘mammy cuss’ and the Minister

Sierra Leone to send first ever contestant to...