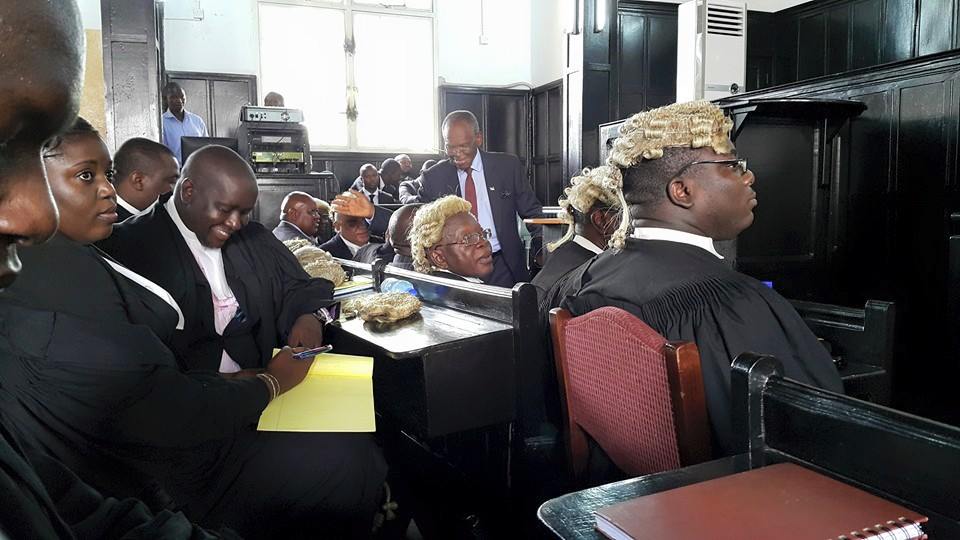 In what is arguably the biggest constitutional litigation in post-conflict Sierra Leone, the Supreme Court today ruled that President Ernest Bai Koroma has the constitutional powers to sack his vice president Chief Samuel Sam Sumana “under section 40 since the requirement on section 41(of the 1991 Constitution) is continuous”.

All five judges sitting on the case gave different concurring positions; there was no dissenting judgment.

Lawyers for Chief Sumana reportedly walked out of the court before the ruling was completed.

The former VP was sacked on 17th March 2015 by his boss, who went ahead to swiftly appoint Amb. Victor Bockarie Foh as replacement.

A statement from the seat of power, State House, said the decision to sack was taken because the vice president had been expelled by his ruling All Peoples Congress (APC) on 6th March 2015, and for “demonstrating willingness to abandon his duties and office as Vice President” following an alleged asylum bid to a foreign embassy, believed to be the American Embassy, on 14 March.

Chief Sumana had sought the courts to determine whether President Koroma had the constitutional power to sack him and appoint a replacement.

The Supreme Court had initially refused to grant an injunction to restrain Ambassador Foh from acting in the Office of Vice-President of Sierra Leone, pending the hearing and determination of the case.

Sierra Leone is currently reviewing its 24 year-old 1991 Constitution, which many citizens believe gives tremendous powers to the Executive President.

Meanwhile, no official comments have come from Chief Sumana and his legal team, which include long standing lawyer and Chairman and leader of the PMDC, Francis Charles Margai; but there were suggestions prior to the ruling of a possible recourse to the ECOWAS Court if the judgment didn’t go their way.
However, civil society organizations have begun to react to the judgment.

Executive Director for the Center for Accountability and Rule of Law-Sierra Leone (CARL-SL), Ibrahim Tommy, said:

“By this judgment, the Supreme Court has done three unfortunate things in just a day: first, it seems to have re-written our constitution by increasing the powers of a president who many think is already too powerful. Second, it has also sacrificed the sovereignty of the people on the altar of political party membership. Essentially, a small party executive can overturn the will of the majority (who elected the Vice President) by simply expelling him from the party on whose ticket he was elected.

“Finally, the judgment may have further widened the perception gap about the judiciary. What’s more, it’s a unanimous decision.”

“This ruling has thrown Sierra Leone into a constitutional mess. There is no way the president could have had the powers to sack his vice. Rule of law has been murdered here.”