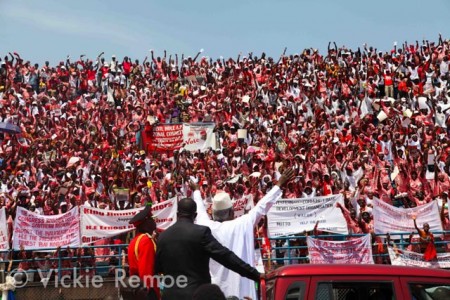 The President of Sierra Leone has announced a continued state of public emergency, although he has lifted limits on public gatherings and business activities in place since August last year.

Political parties will welcome the news on public gatherings. Some had complained that the government was using the state of emergency as a guise to suppress their activities even as the prevalence of ebola had lessened significantly.

Representatives of the All Political Parties Association met with the President last week to ask that the state of emergency be lifted so that they could prepare for their internal elections and resume normal operations. However at that meeting held at State House, the President had said that ebola was still a threat and that emergency measures were still needed.

The State of Emergency that was previously approved by parliament expired on August 6th 2015. It lasted 12 months as is legally provided for in Chapter III article 29 of the 1991 Constitution.
Amadu Lamrana Bah reporting from Freetown last week said plans by the APC led government to discuss extending the State of Emergency beyond the 1 year period were halted by a threatened boycott by the opposition SLPP who refused to sit in on such deliberations.
Bah says that the SLPP not only called for a boycott but asked the public to protest against an extension. Parliament was barricaded by police officers in response to any public action.
The President’s pronouncements made yesterday therefore are meant to both ease growing concerns about the State of Emergency, while at the same time retaining the measures needed to curb the spread of ebola.
According to the President, the restrictions on non-ebola related public gatherings, sporting activities, bars and nightclub hours of operations are officially lifted. However, several posts on Facebook had shown that most people were no longer in compliance with the restrictions. At 1am on July 24, Bimbola Caroll posted a photo of back to back traffic jam in front of a local pub. 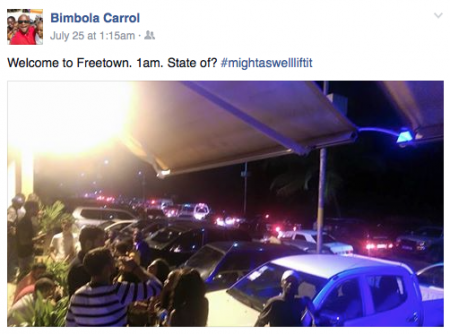 The problem with ebola however is that although the threat has lessened, one action by one person can set the whole country behind. This is why the President pressed on the fact that the war against ebola was still ongoing.
“The risk has receded but Ebola has not fully retreated,” he said.
Those hosting public gatherings must therefore continue to comply with ebola safety regulations like hand washing and temperature checks. Failure to comply “may lead to the barring of such activities”, warned the President.
Amongst the restrictions that have not been lifted are those set for burials and quarantine. The National Ebola Response Center will at a later date announce the new measures that are to go with the new state of emergency which started by Presidential decree on August 7. It can stay in place for 21 days without a parliamentary vote.
There are currently 4 known ebola cases in the country with 500 people under quarantine in Tonkolili district in Northern Sierra Leone.

A five year old girl who was raped...

Senegal and Tunisia record their first cases of...