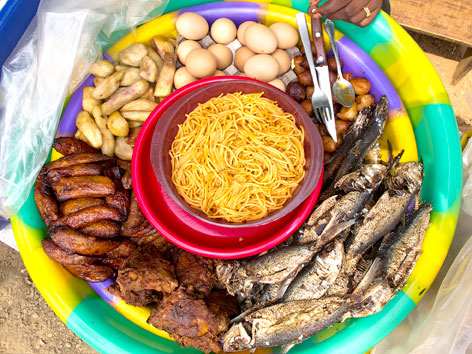 Guinea, Liberia, and Sierra Leone are FEWS NET remote monitoring countries. In remote monitoring, a coordinator typically works from a nearby regional office. Relying on partners for data, the coordinator uses scenario development to conduct analysis and produce monthly reports. As less data may be available, remote monitoring reports may have less detail than those from countries with FEWS NET offices. The analysis presented in this report is based on various field information from sources including FEWS NET key informants, a recent SMS-based trader survey conducted by FEWS NET and GeoPoll, and partner information. 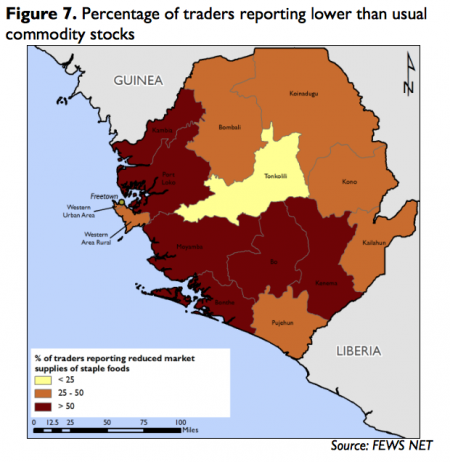 Ebola caseload
According to the World Health Organization (WHO), there has been a total of 9,004 confirmed, probable, and suspected cases of Ebola in Sierra Leone as of December 21. Recently, the number of new cases appears to have slowed although a large number of cases have recently been observed in the districts of Kono, Bo, Tonkolili, Bombali, Port Loko, Kambia, and the Urban and Rural Western Areas.

At a sub-national level, WFP and FAO estimates indicate that Kailahun, an early epicenter in the Ebola outbreak, will experience the sharpest production declines with rice and cassava production down 17 percent and 6 percent, respectively, compared to 2013 levels. Meanwhile, FEWS NET’s key informants report that harvests will be slightly to moderately above average in Kono, Tonkolili, and Koinadugu, three areas with fewer Ebola cases earlier in the cropping season. However, in both Bonthe and Pujehun, two other areas less impacted by Ebola earlier in the year, production is still estimated to be slightly below average due to flooding in these districts.

Market functioning
Ebola-related fears have significantly disrupted trade flows across Sierra Leone. During the month of December, the districts of Kono and Tonkolili were placed under two week quarantines, adding to the growing list of quarantined districts within the country, including Kailahun, Kenema, Port Loko, Bombali, and Moyamba. In other areas, roadblocks and chiefdom-level quarantines are also restricting population movements. While trucks carrying food have been allowed to enter quarantined zones with the proper government paperwork, these quarantines have increased transportation costs and slowed the movement of goods. With regards to cross- border trade, the border with Guinea has recently opened, although trade flows continue to be at reduced levels. All cross-border points with Liberia are still closed.

With regards to market functioning, only 8 to 9 percent of traders surveyed by FEWS NET using a SMS-based GeoPoll survey in mid-November reported that local markets (daily or weekly) were closed, despite an official ban by the government on weekly markets. In addition, another 44 to 45 percent of surveyed traders reported that markets in their communities were open but operating at reduced levels. The highest rates of traders reporting reduced weekly market functioning were observed in the districts of Bombali, Kailahun, Kambia, Kono, Moyamba, Pujehun, and Tonkolili.

Market supply levels and food availability
FEWS NET’s recent trader survey also found that over 50 percent of traders in Bo, Bonthe, Kambia, Kenema, Moyamba, and Port Loko reported that their food stocks were currently at below-average levels, most often due to movement restrictions and high transport costs. Meanwhile, the lowest percentage of traders reporting below-average stocks was observed in Tonkolili (6 percent). Key informant reports indicate that Tonkolili is generally less dependent on trade flows from neighboring districts and had a relatively average harvest, which may explain the district’s better supply levels.

Food prices
Due to the ongoing harvests, November food prices for most commodities declined seasonally compared to October levels. Exceptions to this include imported rice in Kenema where prices increased 8 percent. Historical time series data is limited but for markets where November 2013 price data is available, imported rice prices are generally similar or above last year’s levels. However, for local rice and cassava, price trends are variable with prices below last year’s levels in Pujehun and Port Loko but well above in Freetown. According to key informant information, supply routes into Freetown have been significantly disrupted due to roadblocks and checkpoints, which may be contributing to higher prices for locally produced commodities in the capital city.

Household incomes
According to key informant information, incomes from a variety of sources are down this year due to the economic impacts of the Ebola outbreak. For agricultural households, slightly to moderately below-average harvests and the closure of local weekly markets where households normally sell their crops have reduced crop sales and related household incomes. Border closures, restrictions on population movements, and increased transportation costs have also reduced petty trade and opportunities to sell cash crops (ex. market gardening crops and palm oil). With regards to animal sales, a ban on bush meat sales has reduced incomes for those who normally sell this product. Meanwhile for small ruminants and poultry, the impact of the Ebola outbreak is varied, with reduced sales in some areas due to market disruptions but increased sales and prices in other areas due to stronger demand caused by the bush meat ban. In several areas of the country, charcoal production has reportedly intensified to help offset the effects of below-average incomes from other sources. However, producer prices for this product vary throughout the country, with normal or slightly below-average prices in most areas, but atypically high prices in certain zones where humanitarian organizations have been making charcoal purchases for humanitarian distributions.

Current food security outcomes
In many areas of Sierra Leone, households have been unable to earn typical levels of income through crop sales and non- agricultural activities. This, along with reduced market functioning, market closures, and quarantine measures have limited food availability and access in some communities. Although very poor and poor households in much of the country are still able to minimally meet food needs through ongoing harvests, they are unable to cover essential non-food expenditures and are currently Stressed (IPC Phase 2). Meanwhile, in Koinadugu, Tonkolili, and Bonthe, areas with a higher proportion of rural, agricultural households, food security conditions have been more favorable due to reduced impacts of the Ebola outbreak on crop production and a lower dependence on internal and cross-border trade for food supplies. In these areas, most households are currently minimally meeting both food and nonfood needs and are facing Minimal (IPC Phase 1) food insecurity.

The most likely food security scenario for December 2014 through June 2015 is based on the following assumptions: