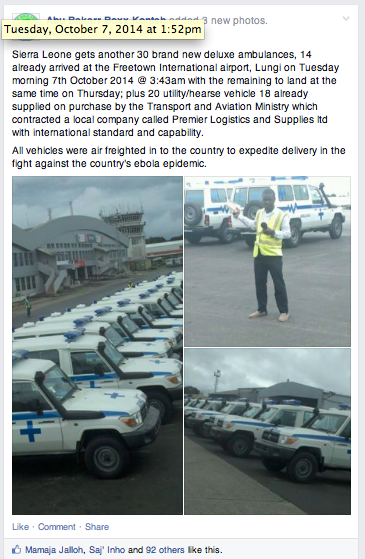 15 year old Augusta Vandy was one of 5 children orphaned by ebola when both of her parents, and an aunt died of the virus in Sierra Leone. The family of 2 boys and 3 girls live in Wellington, on the outskirts of the city of Freetown. Since their parents’ death the children managed with the help of funds sent by family in the diaspora . Then two of of Augusta’s brothers fell ill. A family friend sent out a Facebook appeal that the children needed urgent medical attention. She said that attempts to contact anyone at the Ministry of Health or the 117 call center had failed. Within 24hours of her appeal, an ambulance was sent to the house to take the two boys away to treatment centers, one was positive for ebola. The other was not so he went to a quarantine facility. The three girls were left by themselves at the house, 15 year old Augusta being the eldest.

On Tuesday last week Augusta fell ill, she had a fever, and diarrhea but she wasn’t vomiting. Local volunteer Safiatu Tunis made a barrage of calls to the Dr in charge of the task force in the Wellington Area. She also called case workers who were referred to her. She called child protection services. A police officer was on guard at the children’s home but that was all that there was.

On Thursday, Augusta slept outside on the veranda of her family’s home afraid she might infect her sisters, aged 9, and 5 months.  Over the next couple days she got worse. Despite the continued calls, no ambulance, no health case worker, or social worker came to their house.

There were 3 children in a house in Wellington, now there are two.

On Sunday, the remains of  15 year old Augusta Vandy were removed by a burial team. Her 9 year old sister is now the head of household caring for her 5 month old sister. No one has come to take the two remaining children in the house on Melon Street in Wellington to isolation.

According to Zahiyer Sheriff the woman who contacted me about this story last week, there were 57 people like Augusta suffering from ebola-like symptoms  in the Western Area waiting for an ambulance to take them to care on Saturday. This when social media reports show that a minimum of 64 ambulances have been delivered at the Lungi International Airport in Sierra Leone this October.

Game Over for Nigerian duo on Big Brother