Is Sierra Leone’s President using his assistant to intimidate citizens? 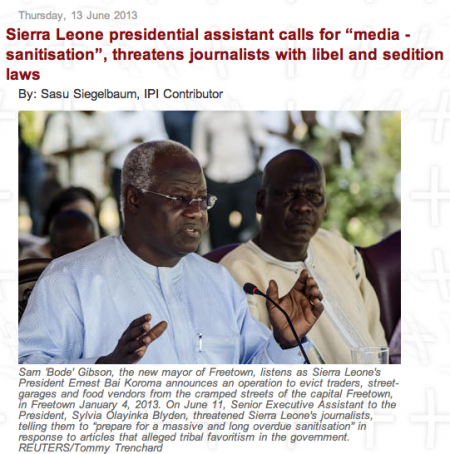 VIENNA June 13, 2013—The International Press Institute (IPI) expressed serious concern today over the future of press freedom in Sierra Leone following inflammatory statements made by Sylvia Olayinka Blyden, special executive assistant to President Ernest Koroma. IPI urges political leaders in Sierra Leone to distance themselves from the threatening remarks made by Blyden, and to commit to protecting press freedom as required by the country’s constitution.

She added: “It is now apparent that the Independent Media Commission has no intention of using the powers granted them to maintain sanity in the media and so we, as a government, are going to be left with no option but to save the country from sliding backwards at the hands of reckless media practitioners. The only solution is to apply Part 5 of the Public Order Act of 1965 and start charging errant persons to court for criminal and seditious libel”.

According to sections 26 and 27 the Public Order Act of 1965,  “any person who maliciously publishes any defamatory matter knowing the same to be false shall be guilty of an offence called libel and liable on conviction to imprisonment for any term not exceeding three years or to a fine not exceeding one thousand leones or both.

“Any person who maliciously publishes any defamatory matter shall be guilty of an offence called libel and liable on conviction to a fine not exceeding seven hundred leones or to imprisonment for a period not exceeding two years or to both such fine and imprisonment,” the Act states.

Blyden’s comments were made in response to articles in what she called “opposition media” that accused the Koroma administration of tribal favouritism in selecting military commanders. Blyden said the articles were “aimed at inciting the country into turmoil.”

She also wrote on her Facebook page Tuesday that, “No politician or so-called journalist is going to be allowed to derail our national unity to serve their parochial objectives. WE WILL ASK FOR THE GREATEST POSSIBLE PENALTY TO BE APPLIED (i.e: we will ask for them to be convicted and jailed). Enough is enough.”

Discussing the recent Truth and Reconciliation Report on Sierra Leone’s 11-year civil war, Blyden also threatened legal action against any journalist who portrayed the current (All People’s Congress) government as “working against South-Easterners.”

Last year, IPI Executive Director Alison Bethel McKenzie visited Sierra Leone on a fact-finding mission prior to the country’s general election. In addition to asking high-ranking political leaders to respect the rights of the press, Bethel McKenzie encouraged editors and journalists to report on the elections and other sensitive topics in an independent and fair manner.

“Given Ms. Blyden’s position, we assume that these reckless comments represent the views of President Koroma, and we are disappointed that the president would engage in this serious and unacceptable intimidation of Sierra Leone’s media,”
Bethel McKenzie said today. “While it is important for the media in any country to practice basic journalism ethics, that does not mean that the press is required to endorse any particular point of view.”

She added: “Instead of threatening to employ outdated criminal defamation laws against journalists, the Sierra Leone government should endorse the Declaration of Table Mountain, which calls for the abolition of such laws on the African continent.”
In 2010, Faith Pansy Tlakula, the African Commission on Human and People’s Rights Special Repporteur for Freedom of Expression and Access to Information, leant her support to ending criminal defamation by signing a joint-statement, which recognized 10 challenges to freedom of expression in the next decade. The statement specifically pointed to criminal defamation laws as one of the biggest impediments to freedom of expression around the world.

Macky Sall sworn in as President of Senegal