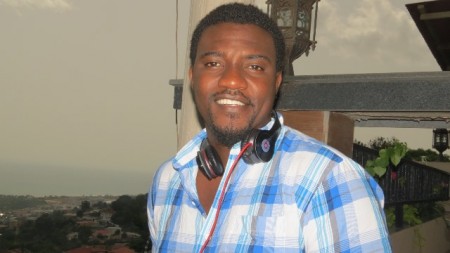 SS: Who is John Dumelo?

JD: I am a Ghanaian film actor, a businessman and real estate developer

SS: How did you get in the film business?

JD: I don’t really know how it started, but I can remember well when I started acting 20 years ago in a movie called “Baby Thief” which I played the lead role. But After that I left acting and jumped into the business because there was not much in the film business then. I returned 8 years ago with the movie “Prince Bribe” which I played the lead as a prince. Since then, I am in it full time.

SS: How do you get inspired as an actor?

JD: I get inspired by the African people; I believe there is a lot in Africans that I get inspiration from, their stories, their tales, their way of living, everything. People in Africa inspire me. I think I am just an instrument that tells their untold stories.

SS: How many films have you acted in or being featured in?

JD: I have done over 40 films most of which have won me awards or get nominations.

SS: Among these films, which is your favorite?

JD: Avila and the Prince Bride. They are great movies

SS: What do you apart from acting in movies?

JD: I have a personal business, I run a charity foundation under my name, I have a film school and I also have a real estate company.

SS: What are some of your challenges in terms of film production in Africa?

JD: The African film industry is still struggling, it needs great improvement and some changes in order to move forward. Our systems are not that good; we have poor regulatory bodies so everything seems to sink down. But as time goes on, I believe things will get back in place, and there will be a change for good.

SS: So what are you doing in Sierra Leone?

JD: I came to shoot a movie titled “Ghetto Queen” with Zainab, former Brother Africa housemate and to donate school materials to schools within Freetown. I am also planning to build a primary school in Freetown and a film school all under my charity organization.

SS: Why Sierra Leone why not Ghana or somewhere else?

JD: I have built schools in Ghana, Tanzania and a lot of other places. Wherever I go, I try to give back to local communities. It is my way of giving back for their immense contribution to my success. It is the primary objective for my charity foundation.

SS: Let’s get a little personal; we have read stories in different tabloids about John Dumelo being a womanizer and often date and dump women. What is your take in that? Are you really a womanizer?

JD: (Smiles) Jaime, you see; actors like me are often surrounded by stories. People will fabricate all kinds of stories about you just to satisfy their own selfish means. Some will pick up these stories from films that they watched you in. But if you get really close to me, you will realize that I am a very nice, simple and out-going person. Those are fake stories spread by some media houses just so their papers or tabloids will sell or people will post such in their social media just to get attention. I have my life to live so I don’t care.

SS: Are you married?

SS: Do you have a girl friend?

JD: Yes I do, a beautiful and caring lady for that matter.

SS: Would you like to tell us her name?

JD: (Smiles again) Ummmmm I will let you meet her personally when next you come to Ghana.

SS: I am looking forward to that. Do you have kids?

SS: Are you planning to settle down anytime soon?

JD: Yes I am, but I don’t have a date set. I am waiting for the right time.

SS: Among the places you have visited in Sierra Leone, which is your favorite?

JD: I love almost everywhere I have been, Lumley beach, Aberdeen, Kissy road, everywhere. I think Freetown is a great city, and I will be visiting here very often to explore more beauties.

SS: Where will you be after you might have retired from acting?

JD: (Taps me on the shoulder) did I tell you I will ever retire? Acting is my life, and I am not sure if I will ever retire. That is why I am building film schools to lay a better foundation for my career. In fact, I will be coming back in about two or three months to commence the Sierra Leone film school project and the primary school. I will also do a two weeks seminar for actors as the project for both schools commences.

SS: Thank you so much John, by the way have you tried any Sierra Leonean dish?

SS: I suggest you try cassava leaves; it’s like Kontomèré in Ghana

JD: Oh yeah? I will try it. Thanks for the suggestion.

SS: You are welcome.

John Dumelo born 3rd February 1984 is the son of Mr. John Dumelo and Mrs. Antionette Dumelo. He is the last and the only boy of three children. John had his primary education at Christ the King International School in Accra, Ghana, where he was selected by GAMA Film Company to play the role as a pupil in the movie “Baby Thief”.

He had his secondary education at Achimota School and further studied at the Kwame Nkrumah University of Science and Technology where he read Civil Engineering. In 2008 he starred in “The King is Mine”, a film that many argue was a career making performance. Since then, he has acted in over 80 movies with Nollywood elites like Ramsey Noah, Omotola Jalade Ekeinde, Ini Edo, Jackie Appiah, Majid Michel and Nadia Buari.

He won Joy FM’s Best Ghanaian Actor in 2009. John has been nominated for Africa’s Most Promising Actor by AMMA 2010 for his role in “Heart of Men,” and also, another nomination for Best Actor by Best of Nollywood Awards for his role in “The Maidens.” John has won Africa’s Most Outstanding Actor 2011 at the Afro Australian Movies and Music Awards in Dec 2011 in Australia. He also won the Best African Actor Award at the African Entertainment Awards in April 2012 in Malaysia. He recently starred in a Hollywood movie with Kimberly Ellis in Ghana. In spite of his popularity, John remains humble and modest: “You know some people can get carried away when fame and fortune knock on their door, making them lose focus of who they are and where they are coming from. I want to work hard to avoid that,” he said. He is a great philanthropist, giving back to the society through charity.

Is Sierra Leone’s President using his assistant to intimidate citizens?

What are they listening to in Sierra Leone?

Lookout for Nneka in film Relentless