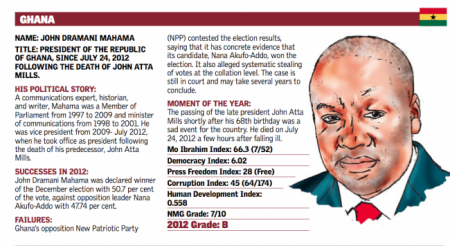 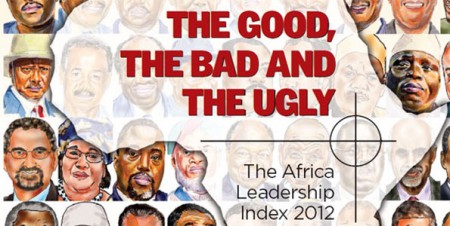 Full PDF via The East African

Sierra Leone’s President Koroma has received a failing grade of ‘F’ from the East African’s Africa Leadership Scorecard 2012 while Ghana’s President Mahama scored a ‘B’. This is Sierra Leone’s lowest grade in the last 3 years. In 2010, Koroma received a ‘B’ and  a ‘C’ in 2011. Ghana also went down one grade. In the two earlier years, late President Atta Mills scored an ‘A’

Compiled yearly the index grades leaders across the region on how they governed from the previous year. See below for the methodology. According to the report President Koroma’s handling of the cholera epidemic was poor. President Mahama’s negative highlight for 2012  is allegations of elections rigging. 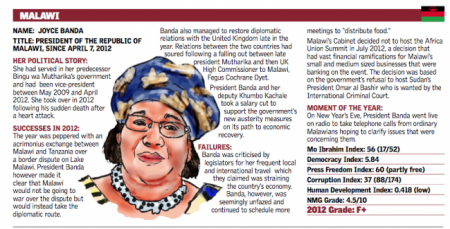 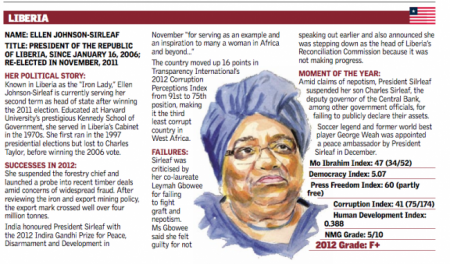 Leaders of the Pack: President Khama of Botswana and President Raamgoolam of Mauritius

Leaders’ grades were derived from how they placed in five respected international indices of governance, plus the Nation Media Group (NMG) Political Index. Their scores in these indices were weighted, then combined to produce a score on 100. The best governors placed closest to 100, and the worst closest to 0. The scorecard heavily rewards consistency. If an Africa leader scores very highly in one or two areas, but poorly in the rest, he/she will end up with a dismal overall grade. A consistent score across the board, on the other hand, will place him/her highly in the overall standings. The indices were weighted as follows:

Leaders were assigned letter grades based on their 0-100 score, derived from the six indices. The best of the group received “A”, good performers got “B”, passable leaders got “C.” Leaders who performed below standard received “D” and “F.”

Also, two special categories were added to these basic grades: the Intensive Care Unit (ICU) and the Morgue. Leaders in this range represent the bottom of the barrel.

Hon Tunis is the new ECOWAS Speaker of...

Sierra Leone qualifies for the African Cup of...

Sierra Leone welcomes the Roots to its DNA...