Internet, roads, and airport much better in Sierra Leone 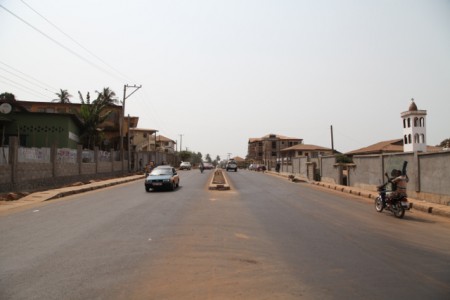 On going improvements at Lungi International Airport, the introduction of 3G, and the near completion of the Congo Cross-Spur Road construction project, are evidence of a much improved Sierra Leone.

Upon arrival at Lungi International Airport I was pleasantly surprised to see that the barrage of signage advertising local companies had been replaced by freshly plastered walls, the look of work-in-progress. And when we entered the arrival hall to make it through immigration, the partition separating baggage claim was also gone. And when we finally got to collect our baggage there were only a handful of handlers as compared the 2-1 handler to traveller ratio that once existed.

For many years, Sierra Leone’s airport was an eyesore in the West African sub-region. Amongst many other concerns, the airport building was outdated and its management wanting.

Lagan Construction  a company headquartered in Belfast, U.K. won the $5 million World Bank funded project to improve Lungi’s Tarmac and security. According to their website, Lagan Construction was charged with improving both London’s Luton Airport, and Bermuda’s International Airport.

Earlier this year I read that the mobile phone companies and introduced 3rd Generation Telecommunications Technologies – 3G to local users in Sierra Leone. When this news broke, I was skeptical because as early as a year ago, some in the telecommunications industry were already claiming to have 3G while operating at what can only be described as .5G speeds.

My sim card was replaced the day I arrived and I was amazed to find that when I put credit on the phone, I was automatically able to browse the internet without any prior configuration or need to visit the local Airtel office. In addition to this, I was able to use google talk and Skype apps, as well as twitter and Facebook. Seven months ago, when I left Freetown, one had to have a blackberry to access the internet. And the few who were able to access the internet on their mobile phones, had to first visit the phone company’s offices to have it done.

I am thrilled to share that anyone with a smart phone can now access 3G services in Sierra Leone. Both Airtel and Africell advertise as 3G providers. Next step for 3G should be the availability of data bundle packages for users instead of the costly per megabit rate.

In 2010 a Chinese construction company won the bid to expand Congo Cross starting at the bridge to Lumley Police Station, and then up to Spur Road. Yesterday I drove the length from Congo Cross to Wilkinson and then up to Spur Road. While construction is still ongoing, the leg from Congo Cross to Wilkinson is complete. And its seems as though the construction company who came under much criticism for the seemingly unplanned manner in which it worked, has learnt its lessons. The Spur Road portion seems much better organized with less congestion. Also from the looks of it, they will probably complete it in a shorter time period.

Sheriff Suma: Man of the Moment

Samza and Kracktwist announce their exit from KME