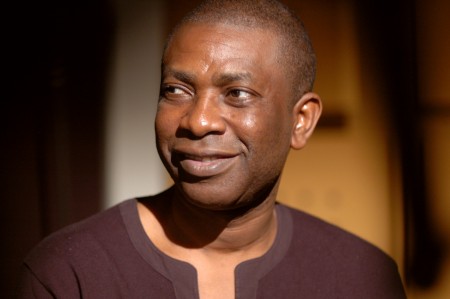 Celebrated Senegalese singer and arguably the King of mbalax Youssou N’Dour has announced that he will run as as an opposition candidate in Senegal’s presidential elections to be held next month.
“I have listened… and I am responding favourably,” Mr N’Dour said in an presentation on his TV station.

At age 52 Mr N’Dour will run against incumbent Abdoulaye Wade, who is seeking a controversial third term.

Mr Wade’s 3rd bid and proposed changes to the constitution prompted widespread unrest in in June 2011.

Although Senegal is one of the more stable countries in West Africa never to have had a military coup, these elections are quite tense.

Responding to those who critics who claim he has neither the experience nor the education to run for office, Mr Ndour said, “It’s true, I haven’t pursued higher education, but the presidency is a function and not a job. I have proved my competence, commitment, rigour and efficiency time and time again.”

But back in 2007, in an interview with the Guardian Mr Ndour said he didn’t want to be a politician. What do you think changed his mind?