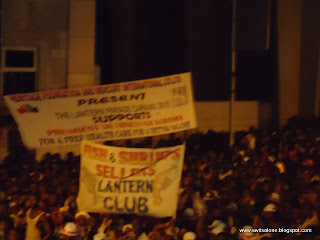 Thousands of Freetown’s residents gathered on the streets surrounding the Law Courts to participate in the yearly Independence Lantern Parade. The theme for this year’s lantern was the President’s Free Healthcare for Pregnant, lactating mothers, and children under 5years old. There were 33 lantern floats in total and of those, 20 were designed to showcase free health care. Freetown’s lantern parade goes back many many years. The curfew days of the military juntas brought lantern activity to a standstill and almost killed this exciting and creative manifestation of Freetown’s spirit. Although, i hardly remember the lanterns during the Kabbah regime, President Koroma’s eagerness to be close to the people has brought a revival of the independence lantern. Standing up on the second floor of the law courts, he smiled and waved, to each float as they danced their way in front of the judges. This year’s parade was sponsored by Mercury International & Africell, who made cash prizes available to the winners.
I arrived with my friend Paul who went along helping me to capture footage of the event for the Vickie Remoe Show. When we arrived thousands of people were already in the streets with the police, military, and boyscout on crowd control. It seemed as though any minute the crowd would burst through stampeding over me and my camera. However, I am happy to report that while a couple people got flogged on the ankles and pushed around, the security personnel did a really good job of maintaining the peace, and i didn’t hear of any serious injuries. They even went as far as taking bottles from passerbys so that they could not be used as weapons.
If you’ve never been to a lantern, its a sight to see and scent to smell. The humidity, excitement, raw sweat, of thousands of bodies, some high, some drunk, grinding, and dancing the night away, is reminiscent of any caribbean/mardi gras fiesta.  As we walked towards the crowd at NP station, we could hear boys chanting “akon day cam, akon day cam”, when i turned it was a young guy in a fedora, and jacket waving to the crowd, i guess until Akon actually showed up, he would have to do. “Fry fry and cham cham” sellers formed a vendors line inside the NP station exchanging their goodies for some money.
Some minutes after 1am, there was a black out. I climbed up to the law court and some lady claiming to be an evangelist began to scream “i cover sierra leone in the blood of jesus”. She felt that evil spirits were trying to take over the night. She also told me she was pregnant with triplets, although looking at her it didnt seem she was pregnant at all. She asked if i loved Ernest and i said yes i like him he is a good guy. Three of the boyscout standing next to me held back chuckles as they listened to our exchange. One of the boys claimed that the SLPP was trying to sabotage the Lantern and they had gone to NPA to bribe the staff to turn off the power. We all sat in the glow of the Africell spotlight for about 20minutes. Eventually the generator at the Law Courts had to be turned to prevent any further delays. When it was turned on the MC made it clear that he felt that some people were trying to destroy their lantern in the presence of the president. He didn’t say SLPP but it was clear the blackout had turned political. At about Lantern number 8, we decided that there was little more to see and we couldnt wait for all 33 lanterns to come through. Just then we got word that Akon had arrived and was on his way to the law court to talk to the crowd. By Lantern 11, Akon was still not there so we took the opportunity to leave. On our way home we got a call confirming that Akon was in town, and had gone to join the president at the parade. He spoke to the people, they went wild…everyone anticipates his concert later today. While i wont be there, I am sure it will be a blast, i hear most of the major SL artists currently living overseas will be performing at the concert tonight. Artists will include Laj  of Red Flag Movement (RFM) and “money na bank” fame, Daddy Saj, K-man, and D’ja Blell( sierra leonean female artist living in Canada) and others.

Happy 49tIndependence, SwitSalone is over and out

The Vickie Remoe Show "Junks Shopping on the BestOfFreetown1"

KKY calls on Parliament to Probe into the...

Sierra Leone: What you need to know about...

Pictures of My Family