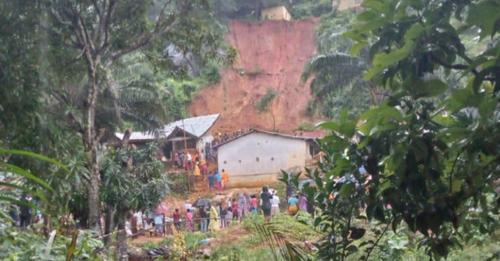 Six people have been reported dead in the mountain area of Looking Town in eastern Freetown amid heavy rainfall across the city on Sunday, August 28, 2022.

According to a social media post by BBC’s Umaru Fofana, the head of the country’s disaster management agency, Lt. Gen. (Rtd) Brima Bureh Sesay, confirms that four men, a woman, and a child died after their house was buried under the mud that caved in.

The rain which lasted for several hours caused flash floods across disaster-prone areas like Kroo Bay, Culvert, Kaningo, and other communities.

President Julius Maada Bio, in a tweet yesterday extends his condolence to the families and friends of the deceased. He further assured that his government will double its efforts to ensure proper flood mitigation measures during this rainy season.

The Mayor of Freetown, Yvonne Aki-Sawyer also send out her condolence to the loved ones of those who died. She used the opportunity to advocate for more planting of trees, and implementation of land use planning that will saves lives.