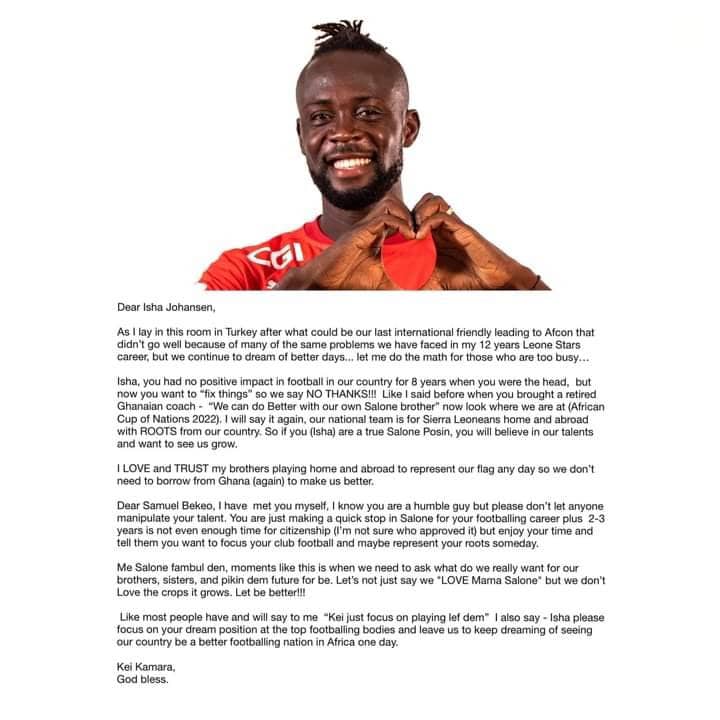 He claimed that Isha Johansen didn’t have any impact on football in Sierra Leone for her entire time as president of the SLFA. He recalled his statement to Madam Johansen when Sellas Teteh a Ghanaian coach, was brought to head the team that the Leone Stars team can do well with Sierra Leoneans and that the national team is for Sierra Leoneans at home and abroad.

“We can do better with our own Salone brothers now look where we are at (African Cup of Nations 2022). I will say it again, our national team is for Sierra Leoneans home and abroad with ROOTS from our country,” he stated.

Kei further states that he Love and Trust his Sierra Leonean brothers playing home and abroad to represent Sierra Leone any day, so we don’t need to borrow someone from Ghana to make the team better.

Moving forward, he further sends out a message to Samuel Bekeo, who he said is a humble guy, he shouldn’t let anyone manipulate his talent. Playing in the Sierra Leone Premier League is just a quick stop in his football career.

So he should focus on his career, enjoy his stay in the country and maybe he will represent his roots someday.