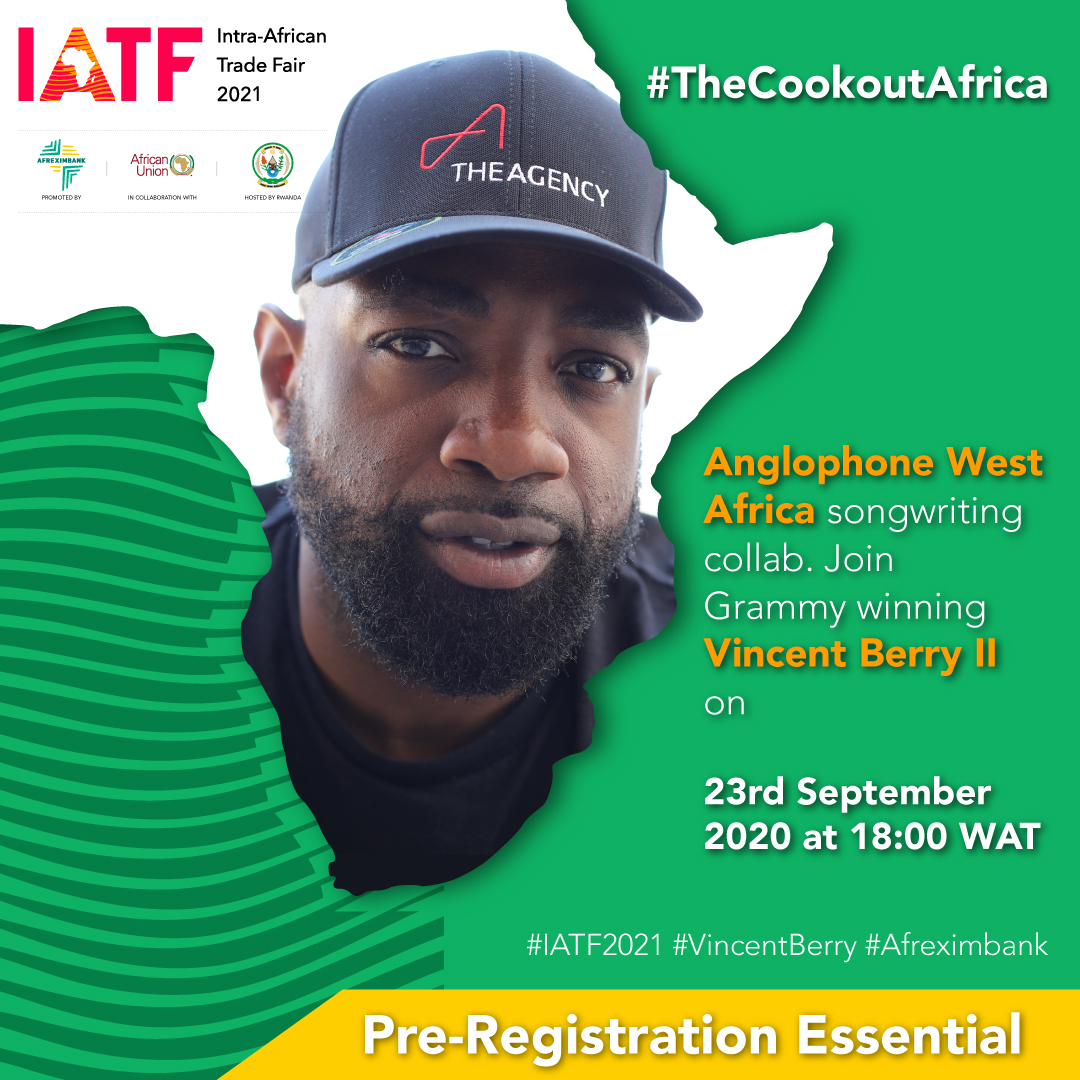 #TheCookoutAfrica continues its rollout virtually across the continent. This collaborative songwriting opportunity is presented by The African Export-Import Bank (Afreximbank) and multi-Grammy Award-nominated composer and producer Vincent Le Carl Berry II. The third edition is headed to Anglophone Western Africa on Wednesday September 23rd at 6:00 PM GMT– open to songwriters from Nigeria, Ghana, Liberia, The Gambia, and Sierra Leone.

These interactive and fully collaborative on-line songwriting sessions are part of the build-up to the Intra-African Trade Fair (IATF2021) and provide both aspiring and professional songwriters the opportunity to write a song, in real-time, with Grammy-winning composer and producer, Vincent Berry II who will work to place the song commercially, with all official songwriting collaborators sharing in the publishing rights.

#TheCookoutAfrica is a resource that empowers African songwriters to highlight their creativity, as well as promote team building and collaboration. This IATF2021 series of events is just one activation aimed at enabling Africa’s creative industries to continue to produce fresh, conscious, and culturally relevant content in a sustainable and cutting-edge manner.

With two successful events having taken place focused on Eastern and Southern Africa, the series will continue over the next few months, reaching across Africa in a celebration of the varied musical sounds and styles of the continent.

This unique songwriting opportunity is free, however, pre-registration which ends 24 hours before the event at 6:00 PM GMT on September 22nd 2020 is essential. Registration is now OPEN for aspiring and professional songwriters from Nigeria, Ghana, Liberia, The Gambia, and Sierra Leone here: https://bit.ly/3lXYRYX

Vincent Berry II is most celebrated for being the Lead Writer of ‘Sandcastles’, on Beyonce’s highly acclaimed project “Lemonade” which instantly became a pop culture phenomenon. The album and film provoked an intense worldwide discussion about race, feminism, social media, and the music industry. Berry has the distinct honor of being part of this 59th Annual Grammy Award-winning Project! Continuing the path of success, Berry has participated in six Nominations in the past eight years. Most recently participating with J. Cole & Dreamville on the “Revenge of the Dreamer III”, a 62nd Annual Grammy Award Nominee for the Best Rap Album of the Year. Berry has also written for Akon, Ari Lennox, Babyface, Brandy, Chris Brown, Estelle, Mary J. Blige, Migos, Sean Paul, Shaggy, Ty Dolla Sign, and Usher, to name a few.

While the 2021 edition of the Intra-African Trade Fair (IATF) may be taking place next year, the dynamic program for Africa’s creatives has commenced.   Africa’s creative industries will be a major focus at the event and #TheCookoutAfrica, along with other upcoming digital events, aims to build a transformative way to engage, educate and encourage creatives globally to collaborate as part of the on-going build up to IATF 2021.

To take part in this free songwriting opportunity, simply go to https://bit.ly/3lXYRYX and fill out the application to reserve your spot. Space is limited, so sign-up now!

The second edition of the biennial Intra-African Trade Fair (IATF), promoted by Afreximbank in collaboration with the African Union (AU), will be hosted in Kigali by the Government of the Republic of Rwanda from 6th to 12th September 2021, under the theme “Building Bridges for a Successful AfCFTA”.