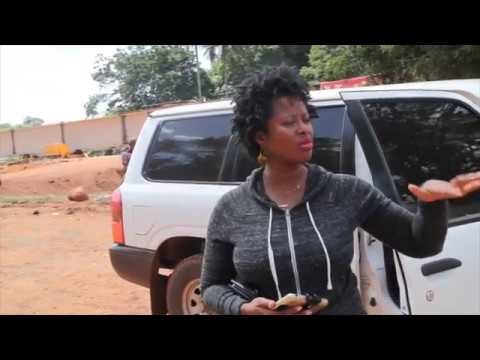 In 2008 when I started producing the Vickie Remoe Show I was trying to copy what I had grown up watching in the US; Ricki Lake, Jenny Jones, and of course Mama Oprah. Talking to people seemed easy enough. How difficult can it really be to do a talkshow in Sierra Leone?

There are two things I took for granted when I got the idea to produce a talk show here. The first which I learned quickly enough was that there is a whole technical TV production machinery behind the US daytime talkshows. The other is that in order for people to watch your TV talk show (well produced or not), they need electricity. In 2008 Freetown was the darkest city in West Africa, things were so bad that people nick named a small generator that majority lived on as ‘Kabbah Tiger’, after President Kabbah who handed over power after the 2007 elections.

When the Vickie Remoe Show started broadcasting on SLBS TV I didn’t have electricity to watch it. I actually had to make plans to be at a friend’s house who I was certain had a generator.

Despite the challenges to production and viewership we kept going. The show picked up, those who would be fortunate enough to have light on Fridays at 10pm watched me first trying to copy the US style talk show and later dumping that after season 1. Instead of bringing people into a studio to talk to them about their life, go out into the streets and meet them where they are.

In doing so I was able to find my own voice, my own style of story telling and build a stronger connection with viewers at home. Whether it was going to find blind thumb pianist Sorie Kondi, or scavenging in the City dumps, the Vickie Remoe Show quickly became a local staple.

Between 2008-2011 I produced over 30 shows for broadcast over 4 seasons. We produced stories in Ghana, Nigeria, Senegal and Mali that showed viewers back home life in the region.

By 2010 people started to reach out to me to cover issues affecting them and their community. I was at the law courts at Cotton Tree one day when a woman started to talk to me. She said  “Vickie Remoe…good, please I want to tell you about what has happened to my family’s land. You’re a journalist you can put it on your show. After I listened to her harrowing story all I could say was I’m so sorry but I’m not a journalist. I suggested local journalists she could reach out to and left.

I felt like an imposter. I knew I wasn’t a journalist and I hadn’t been trying to pass myself off as one but my audience thought I was. That same year I went to visit Columbia Journalism School. I was certain story telling was what I wanted to do but I couldn’t continue producing the Vickie Remoe Show if I hadn’t received the necessary training. If they are going to think I’m a journalist then I need to become one.

A lot of people advised me to stay in Sierra Leone. They felt my show was just picking up and I needed to stay to continue to build it. I was torn. So I decided I would only apply to Columbia’s J-School. If I was accepted then it meant God wanted me to go and if I was rejected then it was a sign that I should stay. I applied. On the night I submitted my application I was in Nigeria covering the MTV Music Awards with sponsorship from Airtel Sierra Leone. By day, I interviewed Nneka and Mo-Cheddah recording artists up for best new artists awards at the 2010 MAMAs. By night, I was in my friend’s boyfriend’s house in Lekki trying to finish my grad school admission essay while they snuggled in the corner.

In March 2011 I was accepted to the J-School. I called my grandma in Accra to let her know. She wasn’t as excited as I hoped she would be. When I told her I was accepted I was surprised  that after congratulating me she asked about the show.

“You don begin di show en pipul den lek am, wetin dem go do way yu go?” You’ve started your show and people like it what will they do when you go?

I told her I was just going for one year and I would be back. That was the last time we spoke. A week later she passed away in Ghana. We buried her in Freetown and two months later I left Sierra Leone to relocate back to my apartment in Harlem. The same one I had left in 2007 when I moved to Sierra Leone.

I graduated from J-School in 2012. I decided to move to Ghana for a year and return to producing the show in 2013. One thing led to another and seven years passed. In that time I built a marketing company and became somewhat successful handling top brands in Ghana but each year I wondered when I would come back to do the show. It was this latent but constant longing in the back of my mind.

In July 2017 I decided I was going to do whatever I had to, to if nothing else produce one season go the show. In November I was in Sierra Leone signing an MOU with a TV broadcaster for content production.

In March 2018 I put together a small team, pretending like I didnt know I couldnt really afford to produce the Vickie Remoe Show and went to work.

So far we have shot 8/10 shows and have started post production.

I’m finally back to producing the show. If we only get to broadcast this one new season of 10 shows I would feel I finally kept my promise to my grandma.

I came back to do it again, like I said I would.