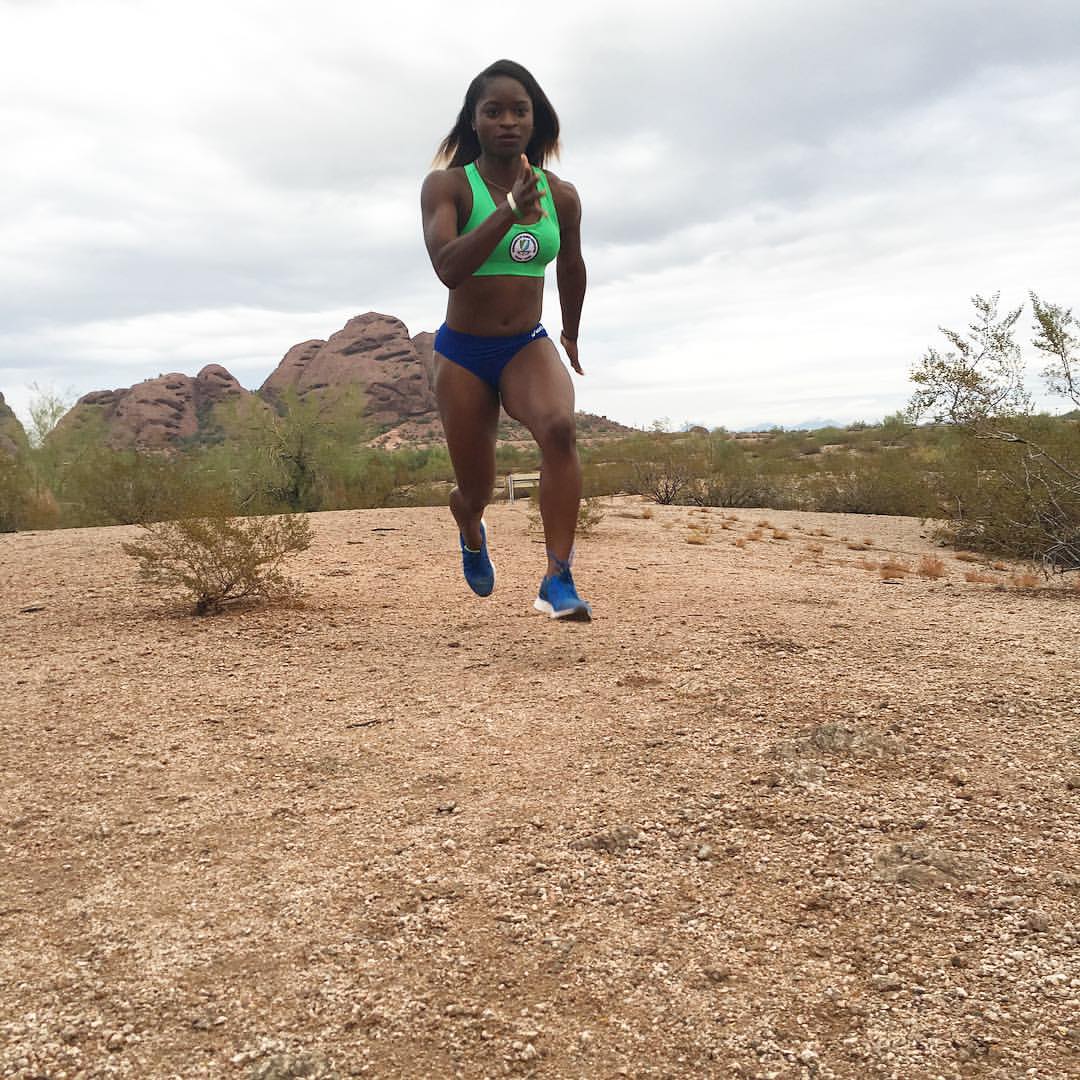 Hafsatu Kamara is Sierra Leone’s fastest woman and this summer she will represent the green, white, and blue at the Rio Summer Olympics in Brazil. In this interview with  she discusses her journey, the rigors of being an athlete and sprinting for Sierra Leone.

In May 2015 at the U.S. Olympic Training Center in Chula Vista, California, Hafsatu Kamara ran the 100 m at 11.78 seconds and set a new national record. The 100m record was previously held by Fatmata Bangura who ran it in 11.87 seconds.

How did you start in athletics ?

I started at a young age when I lived in Sierra Leone in the 90s. There’s a photo of me at the National Stadium representing the orange team. Once I was back in the US, I picked up playing other sports like basketball, softball, and soccer. It wasn’t until high school that I got back in to track and field. My senior year at Nottingham High School in Hamilton, New Jersey was a breakthrough year for me. That’s when I really realized the potential I had running and from there it continued into college and beyond.

What was your first big win?

My first big win was in 2013 at my first competition representing Sierra Leone at the West African Region II meet in Burkina Faso. I won the 100m Grand Prix invite. That feeling still lingers with me today and helps to keep me motivated.

I am inspired by Muhammad Ali, Evelyn Ashford, and Serena Williams. These individuals display what it takes to be an outstanding person and how to make a difference in the world. If I could replicate a quarter of the impact they have made in this world, than I have done well.

I look up to my parents. As immigrants from a developing country they took a chance leaving Sierra Leone in order to give us a better opportunity. As a first generation American, I admire their drive, their focus, and discipline. I hope to continue their hard work and set a platform for success for my children.

How often do you train?

I train about between 4-6 days a week depending on my competition schedule.

What about your education, are you currently in school ?

I have a Bachelor’s of Science in Kinesiology Exercise Science. I am currently working towards pursuing my Clinical Doctorate in Physical Therapy.

Hafsa in your spare time, What do you do ?

In spare time I am working towards learning new things. I am currently working on brushing up on my Arabic. I also love training and coach young athletes in track and field.

Who is currently trending on your playlist ?

I love reggae and dancehall; its my go to genre when it comes to music. Im currently listening to Popcaan, Movado, Vybz Kartel, Iyana, Tory, Lanez, and Wiz Kid.

During training, I like warming up to J. Cole, Drake, Devon Terrell, and Tory Lanez.

You represented Sierra Leone in the 2014 Commonwealth  Games and now you’ve broken Sierra Leone women’s 100m, 200m Record! How does it feel?

I am absolutely proud and humbled to be able to represent the country of my ancestors. Breaking the record was a moment that helped me put into perspective the potential I have in this sport and helping set a standard for Sierra Leone athletics.

What were your thoughts as you decide to compete for Sierra Leone in the 2014 commonwealth games? Was it to prove something to yourself as an athlete or something much deeper?

At first I went to the Commonwealth Games with a personal vendetta to prove my talents. Once I arrived in Glasgow and I met my Sierra Leone-based teammates my motivation changed. Their goals as far as athletics was to find an outlet from the troubles in Sierra Leone. I wanted to share that goal with them. I realized the unique opportunity I have to be able to live and train in the US. Now I am motivated to help young Sierra Leonean athletes find above our troubles to receive opportunities for success.

You just got back from the African Championships in South Africa,

Tell us a little about that.

It was definitely a difficult journey getting to the African Championships. Aisha Naive-Wey, Ngozi Musa, and I were able to make it out there and represent Sierra Leone despite the issues laid out in front of us. We weren’t able to run our Women’s 4×100 relay due to a lack of athletes. Individually we did our best with the position we were placed in. Aisha was able to do well for Sierra Leone and make it through the 400m hurdle finals and finish 7th overall. It is difficulties like that that encourages us all to keep pushing through the adversities and take each inch given to us.

How involved are you with the Athletics organisation in Sierra Leone, If any involvement?

I am well acquainted with the Sierra Leone Athletics officials and members and the National Olympic Committee officials.

Do you keep up with the news of the national team etc?

Not as much as I should. It’s hard with the limited form of communication.

Why do you think sports such as athletics don’t get as much representation in Sierra Leone as football does?

Athletics is a poor sport overall. It being an “amateur” sport with recognition only being made every 4 years during the Olympics makes it hard for us to gain continuous support. For countries like Sierra Leone, its even harder. We don’t have club teams or organizations, just individuals with goals and dreams.

What measures do you think should be put in place to bring awareness to other sporting activities in sierra leone and gain as much recognition and interest as football does?

The people need to show interest, with numbers, comes awareness. We need our families and friends to show support. To come to our meets, to spread the word, to donate to our training and competition. We need businesses to come to our aid, to advocate for the young. Youth and community outreach programs should help to be bring people together and inspire the youth.

If given the opportunity in the future, would you coach the  Sierra Leone National team and other aspiring athletes?

Yes I would! I want to start a youth athletics program in Sierra Leone. I want to be able to bring other athletes to Sierra Leone to hold training camps like they do in other countries. That would not only help us as athletes but our country in the sports business and development.

Finally, What does the future hold for you in athletics?

My personal goal is to continue breaking my record and make a name for myself as far as a top Sierra Leone Athletes no matter the sport. My community goal is to increase the number of athletes we have competing in track and field. To build and develop sports in our country outside of just football.