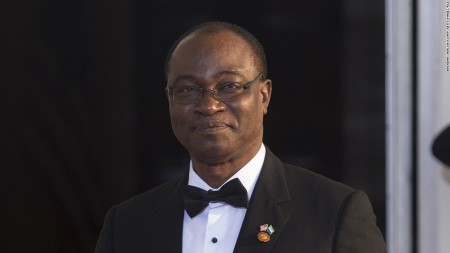 Sierra Leone’s Minister of Foreign Affairs Mr. Samura Kamara spent the past couple months campaigning regionally to win the presidency of the African Development Bank. Kamara is an economist who was the boss at the Ministry of Finance before his presidential reassignment to Foreign Affairs. Now that the AfDB job has gone to Nigeria’s Akinwumi Adesini, the editor of the Sierra Leone Telegraph has made two points worth reviewing as to Kamara’s position in cabinet.

The first point is that Kamara’s inability to convince the AfDB confirms his shortcomings that were already evident with his mis-steering of the Ministry of Finance, and the final point being that Kamara should resign because his desire to seek a new job perhaps shows a lack of interest to continue in his current post as a member of cabinet.

“If there is one lesson to be learnt from the failure of minister Samura’s quest for the presidency of the African Development Bank, it is that whilst Samura may be regarded as a giant by his fans, in the wider scheme of things on the African continent – clearly he is a midget that is trying to box above his weight.

He was given the opportunity to transform the lives of 6 million people in a country with a GDP of about $3 billion by successive governments, but he blew it.” ~ Editor – Sierra Leone Telegraph (Full Post Here)

Do you think the above points are ground enough for Kamara to resign?