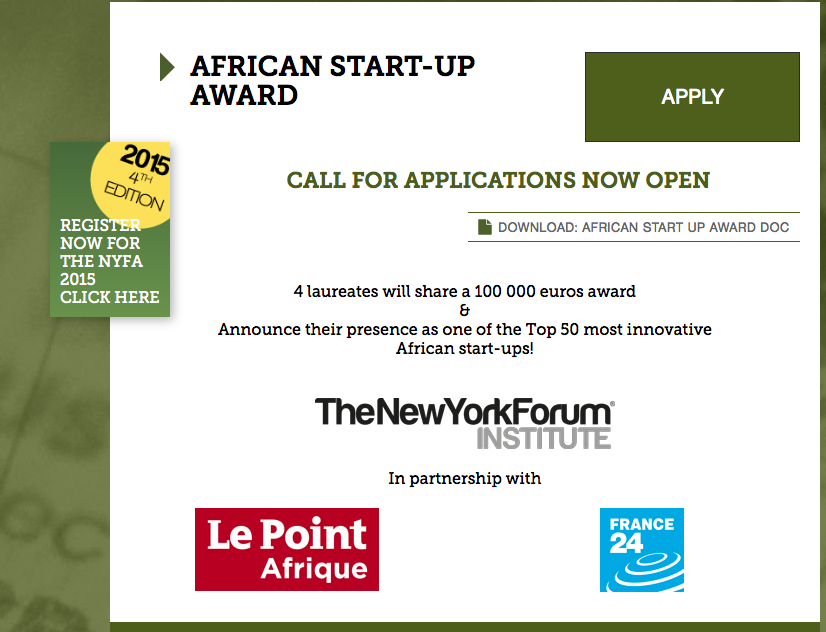 Richard Attias, Founder of the New York Forum Institute and the NYFA, has created the African Start-up Award in partnership with Le Point Afrique and France24. The Award will support talent and the most creative initiatives, particularly those with a social impact component. Four
laureates will be announced live at this year’s NYFA in Libreville, Gabon, August 28-30, and will share a *100,000 euro prize fund. * 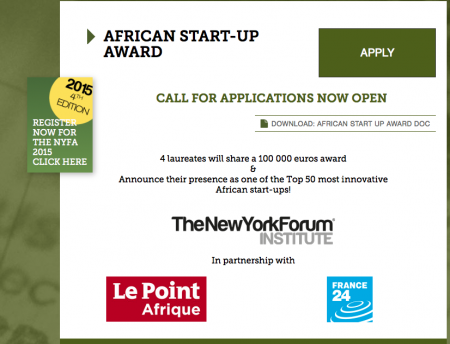 [highlight]START-UPS WILL BE JUDGED BY A PANEL OF AFRICAN BUSINESS LEADERS IN FOUR AREAS:[/highlight]

100,000€ grant provided by the New York Forum Institute, founded by Richard Attias, to be allocated among the 4 laureates as follows:

The Top 50 of the most innovative African start-ups

The African Start-up laureates will gain unprecedented visibility towards the 1,500 participants expected at the New York Forum AFRICA 2015 in Libreville, joining economic and political stakeholders from Africa and the rest of the world and via Le Point.

• The 4 laureates will be invited to attend the New York Forum AFRICA, August 28-30 2015, with return flights and accommodation expenses covered.
• The laureates will be promoted in Le Point August 27, 2015 edition distributed during the NYFA and on Le Point Afrique website (founder photo and company profile).
• They will have the opportunity to join a special plenary session during the NYFA to share their entrepreneurial experience with young Africans and inspire them.
• The Top 50 companies will also be presented in Le Point August 27 2015 edition and will be invited to attend the NYFA 2015.
The laureates and the Top 50 will be presented during the next New York Forum AFRICA, under the High Patronage of H. E. Ali Bongo Ondimba, to be held in Libreville, Gabon on August 28-30 2015.

Africa has ideas and talent but African start-ups lack access to capital, especially in the first phase of development.

In this context, Richard Attias, founder of the New York Forum Institute, initiated the African Start-up Award in partnership with France 24 and Le Point Afrique, the on-line edition of Le Point dedicated to Africa that was launched in March 2014.

The Award will support talent and the most creative initiatives, particularly those with a social impact component.