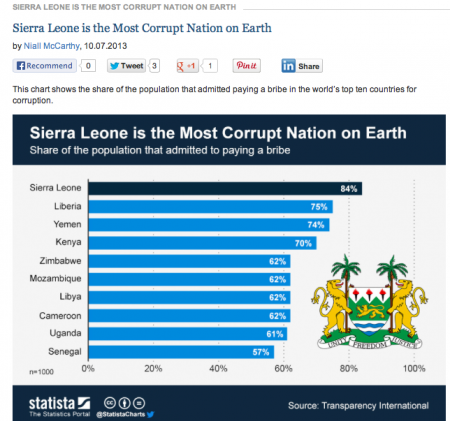 A recent Transparency International report on corruption and bribery  has divided Sierra Leoneans into two camps. In the first there are pro-government folks who say TI as an institution has no credibility. In this camp you’ll also find those who also argued that the East African’s F grade for governance given to President Koroma in the papers’ 2012 Leadership Index was also baseless.

In the second camp you’ll find the majority of Sierra Leoneans who would probably say that they did not need a report showing what many have already experienced especially amidst banking and NRA scandals. If you lived in Sierra Leone in the last 10 years chances are you had to pay a fee to someone in public service as an incentive for them to do their job. You pay either to encourage them to do so in a timely manner or to just do it at all. This is not to say that you have to pay all civil servants, but often times if you don’t pay a bribe, your problem remains untreated.

Perhaps you’re bidding for a government contract, and you feel that  others submitting a bid might make your documents disappear before ever they do the bid opening so you pay “somtin small” to keep you bid in tact. Maybe you get the contract, and you head to the Ministry of Finance where government payments are processed, when you get there you know that you have to pay “somtin small” to make sure that instead of 1 year maybe you get your payment in 6 months. The thing is no one is going to ask you to pay, but you know if you want things to happen “somtin small” for pass.

Other times a mere 5,000 or 10,000 leones can make the difference between getting your passport in 5 days or 30 days. Or you may be at the airport trying to leave the country and the staff there checking your suitcase will ask “wetin yu di lef foh yu broda dem now?” As they say, their facial expression and body language will say “sometin small so we don’t check your bag”.

In another other instance a customs official may tell you that you goods have arrived and that he can do clearing for 5% of the value that you would have to pay the government. Then he would tell you that for paying that much, you would get your goods in today. He would then casually inform you of your option to wait for Intertek to go to Lungi Airport to evaluate the goods. At which point he’ll also let you know that once that happens it will be out of his hands. Then he’ll tell you that you should know that they have reclassified the rates on the goods and that everything has gone higher with the dollar. It wont make any sense to you, but you will understand that today, you must pay “somtin small”.

So, TI’s report  is of little value. In fact, the report itself other than causing debate is rather useless to people in Sierra Leone. The real and perhaps more pathetic issue here is that the average Sierra Leonean has no confidence in their public institutions. When they go for public goods and services they know that if “dem noh pay somtin small natin no go apin”.

But how long pan dis? You go to a hospital, and you give “somtin small”  to the nurse so she would take more care of your family member because you’re not sure if she will do her best if you didn’t do so.