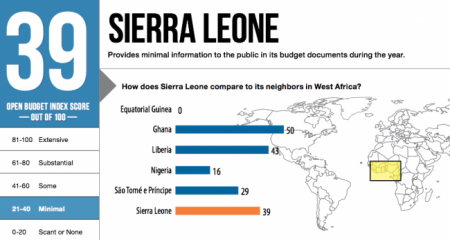 A new report from the International Budget Partnership gives Sierra Leone a score of 39 percent for providing just minimal information on the government’s annual budget and expenditure to the public. The Open Budget Index is compiled based on surveys of “eight budget documents available to the public, as well as whether the data contained in these documents is comprehensive, timely, and useful”.

Sierra Leone ranked lower that Liberia at 43 and Ghana at 54 but scored higher than Nigeria at 16. There are several indicators that the country needs to meet to increase government transparency and public participation in the national budget process. As it stands now the government does very little to engage the public during and after the budget consultation. There is no “public hearing in the legislature on macroeconomic budget framework”, nor are there “opportunities in the legislature for testimonials by the public during budget hearings”. The Supreme Audit Institution (SAI) in this case the Bank of Sierra Leone does not communicate its findings to the public beyond publications of the audit report, neither is there any mechanism for the public to take part in the audit agenda.

As Sierra Leone rebuilds its institutions, the government has to make sure at all levels to engage the public in its decision-making processes especially with regards to the national budget. Increased transparency in the budget process serves two main purposes; the public can help government develop alternative measures to gain revenue etc., and a better understanding of how national funds are spent will mean that a more informed public can hold its government accountable.

The IBP notes that it was unable to get comments on the draft Open Budget Questionnaire results from the Sierra Leonean government.