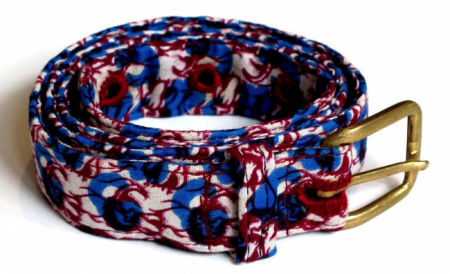 Three years ago Daniel Heyman was the younger half of a duo of expatriate researchers dubbed the ‘Hardy Boys’ in Freetown. Today Heyman an MBA candidate at MIT Sloan Business School, is the front man for a social fashion enterprise that employs Sierra Leoneans to make Africana belts under the brand ‘Bureh’. The company takes its name from the legendary temne warrior Bai Bureh and a beach on the peninsular of the same name. Half of the company’s revenues will go back into investing in local startups.

Heyman and his two partners one from Sierra Leone and another from SA were able to raise  capital of $10,000 for Bureh LLC via crowd funding on Indiegogo. The belts are made by tailors and blacksmiths in Freetown some of whom are disabled.

The first belt was designed with local african print fabric and an old belt buckle. After it got rave reviews from Sierra Leone and abroad, the trio made more sourcing fabric locally and making buckles from “salvaged car parts and other recycled metals.”

The very trendy belts are available online on Etsy. They are shipped directly from Sierra Leone to the US at a retail price of $45.

We love this because it’s not a pity party about poor war-ravaged *insert the usual story here*. Some other brands using pity to sell their products in Sierra Leone should take note.

For more about BUREH

MADE IN SIERRA LEONE