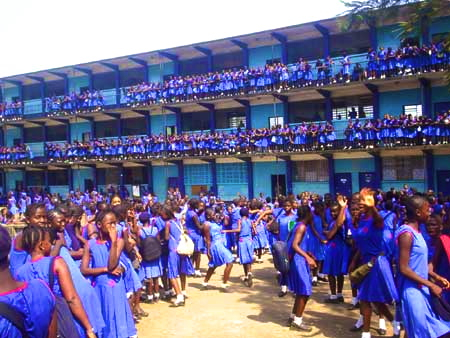 Last week, in the middle of all the craziness with my moving to a new state and starting a new job, I took a minute or so to read a commentary from one of the Sierra Leone’s online newspapers. The piece was a well-written commentary about the current gap between rich and poorin Sierra Leone.

The writer suggested that the government should mandate “gara tie-dye” uniformed in order to save the nation’s contracting Gara textile industry. Right now most schools wear poplin or cotton or both as uniforms to school although there are a few private primary schools that use gar a. Below is an excerpt  from the story to which I am responding.

Also, Sierra Leone is known the world over for its good quality Gara garment. The northern headquarters of Makeni is the seat of its production. Some of our leaders today got their education through proceeds from the Gara trade. Today, this trade is diminishing steadily, putting hundreds of people who are involved in the production chain out of employment. What have our governments done to save this once viable trade from extinction? Why do we continue to import garments or school uniforms from mainly China, whilst our local garment industry is crumbling? For every yard of poplin that we import from China or other countries, we are building the economies of those countries and undermining ours. Is that the way we want to bring prosperity to Sierra Leone?

We have close to 5,000 public primary schools and about 500 public secondary schools with an enrolment that exceeds one million pupils. Can you imagine how many jobs will be created if the government of Sierra Leone makes it a policy that all public schools in the country must use Gara for their unions? The government should not only make the policy, but must take necessary actions to organize and support the local producers to produce enough garments that will meet this demand. It will then be left with the individual schools to determine the designs and colours that they will want for their pupils. To me, this is real wealth creation.

While I agree with the writer that Sierra Leoneans should be willing to support our home industries, I differ from his suggestion that the government mandate a change to the school uniform policies of schools in the country, and have all school-age children wear Gara.

While I love to wear gara clothing and share the author’s position that in order to build a more prosperous Sierra Leone, we need to build different industries including the textile industry, I don’t agree with the method to achieving this.

Many schools in Sierra Leone have long histories and different traditions, and some of these traditions include their style and texture of their uniform code for students. For example, I attended the St. Joseph’s Convent where generations of girls have attended, proudly wearing the pink and blue poplin as their uniform. I believe that forcing schools such as Convent and others to wear gara uniforms might end up alienating the young especially from supporting this very crucial industry.

Should Sierra Leoneans be willing to support our own? That’s a definite yes! However, we have to remember that in a democratic country that is beginning to encourage the growth of decentralization, we should stay away from using the top down approach especially when it comes from politicians and bureaucrats. If the government chooses to rebuild the textile industry, then they should encourage schools to determine whether or not they would like to adopt gara clothing as their uniforms. Government should perhaps offer to subsidize uniform costs for those schools who want to opt in to gara. The schools alone are in a better position to determine what their uniform policies are based on their needs, traditions, and school cultures.