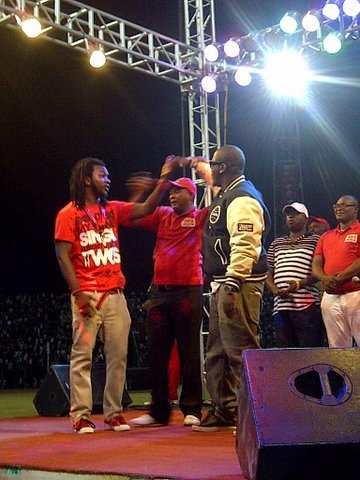 Sierra Leone’s biggest hip hop rivalry has ended. The annual East vs West concert was the venue of the unexpected reunion of two of the nation’s most prolific lyricists L A J and Denero. On Easter Monday, Red Flag Movement’s L A J and Black Leo’s Kao Denero joined hands at the stadium agreeing to stop their long standing on again off again feud.

L A J had had a rather controversial week. He allegedly insulted the nation’s DJs on a radio interview where he said they were a bunch of “untrained and unqualified beggars”. In retaliation the DJs held a press conference and announced that they were going to boycott L A J’s music both on radio on in night clubs.

While the ban did not hold as his music was played all through out the holiday period  L A J read a letter of apology to the D Js at the East vs West concert. Amongst other things he said he had changed and apologized for his behavior. He ended by saying that he was changing his name from L A J to “de PA”.

After he read his letter the Minister of Political Affairs, Alpha Kanu wearing a red polo shirt walked unto the stage announcing that L AJ and Denero had agreed to put an end to their artistic differences. Both artists joined him on stage and they held hands in front of thousands at the national stadium. Denero went on to perform songs from his new album “De Blood Diamond Kid Story” which was launch on April 7th at Atlantic Beach.