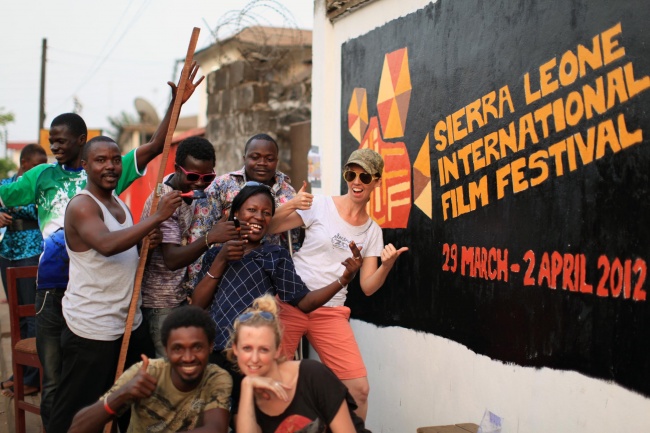 The Sierra Leone International Film Festival (SLIFF) kicks off today at Cruzer Cinema in Aberdeen,Freetown. The first of its kind festival is a collaborative exploration in story telling and cinematography featuring ongoing educational programs for creatives and film makers as well as six days of both local and international film viewings.

The festival will run from March 29 – April 3, 2012, with additional screenings and educational programs in Kenema, Bo, Kono and Makeni. Festival organizer Layna Fisher says she is taking the films upcountry to “allow for a wide reach across tribal and political lines” in hopes that it will unify the country in a positive, creative, educational experience as it hosts international visitors and shares in global cinema.

Layna Fisher is a performing artist and producer with extensive theatrical experience. In 2005 Truncated, an inquiry into the diamond trade in Sierra Leone was performed at the Public Theater. The play was based on interviews and research gathered over 2½ years, and followed a New York City journalist as he traveled to Sierra Leone to investigate the unchecked corruption inherent in the pursuit of the world’s most perfect currency.  Fisher who is now based between New York and Freetown got the idea for the film festival on her many travels within Salone.

Today’s opening international feature “Stories from Lakka Beach” is a documentary that profiles a fisherman, a carver, a restaurant owner, a local politician and an aspiring rapper living off the shores of Lakka beach on the Atlantic Ocean. Director Daan Veldhuizen won the American Cinematographer Magazine Award for cinematography earlier this month at the 2012 Salem Film Festival.

Participants will be treated to international documentaries and feature films, workshops, a unique canoe rowing experience for a screening on the beaches of  the Bunce Island slave port and a film at a panel in a remote village.