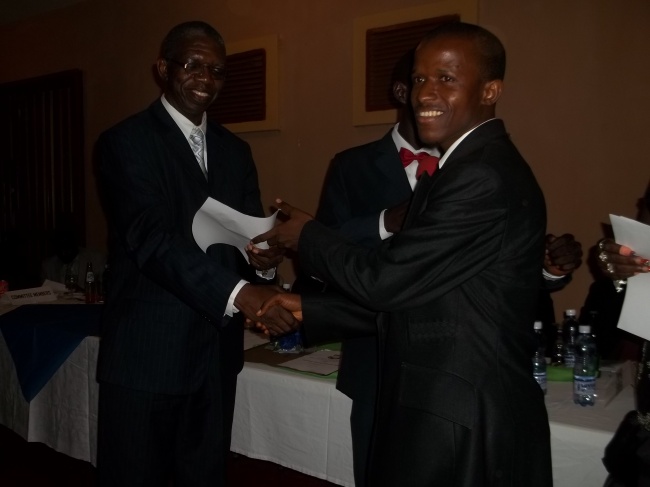 Twenty-Eight students from the various campuses of the University of Sierra Leone received awards of academic excellence in Freetown.

The 6th annual awards banquet was held for the first time at the Vice Chancellor’s lodge at Spur Loop with the theme “celebrating excellence and productivity.”

Professor Jonas A.S. Redwood-Sawyerr, Vice Chancellor and Principal of the University of Sierra Leone said the event was was an opportunity to celebrate the remarkable achievements of students and staff for the 2011 academic year.

“This event is inspirational and meant to recognize brilliance, hard work, and dedication to a course, meritorious contribution and innovation, and to show case the best of brains of the University of Sierra Leone’’ said Professor Redwood-Sawyerr.

Despite the plethora of challenges facing the University it can still find a day to celebrate excellence. “At least, this gives a sense of hope for a brighter future for the University,” he maintained.

He said the University is lags behind in infrastructural development. He raised concerns over what he described as ’sporadic and incessant’ strike action by academic and junior university  staff noting that this was  negatively  affecting  students’ academic performance.

The awards night should have happened back in December but a strike action by the Academic Staff Association (ASA) that lasted over a month pushed the event back.

“I am proud to be recognized as a promising and hardworking student; it’s a challenging task coming this far”, said one of the the awardees, Mohamed Faray Kargbo from the Mass Communication Department at Fouray Bay College.

“University of Sierra Leone is a major producer of human resource for the nation,” said Mr. Edward T. Ngandi the school’s registrar. He said the university has an esteem reputation which it needs to maintain.

Mr. Ngandi maintained that the award ceremony was one way to publicly recognize and thank those who have been honoured for their remarkable achievements in the mission and vision of the university.

He urged the awarding students of the constituent campuses of the university to demonstrate leadership role and served as an inspiration to others for a better society.

The awards night also attracted members of the private and the public sectors.