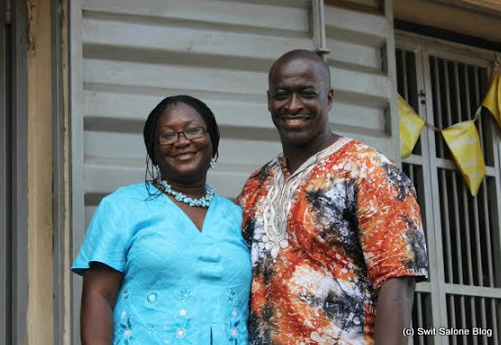 In 1995 Modupe Taylor-Pierce was paralysed by two bullet wounds in an ambush in Masiaka as a Seargent in the Sierra Leone Army (SLA). A graduate of Cornel University & West Point Academy he returned to Sierra Leone in the early 90s to give back by enlisting in the millitary. After the attack at Masiaka, he spent 3 months at 34 Millitary Hospital in Wilberforce before West Point alums assisted his family to fly him back to the States. In 1996 he was discharged from the SLA while he was still in recovery.

His wife Renee left Sierra Leone in the early 90s in search of greener pastures in the US. She emigrated to New Jersey and met and wedded Modupe after only 3 months of courtship in 1998.

I met the Taylor-Pierces (or the TPs…as i like to call them, now that I am apart of the family…hehehe) at their new home in WIlberforce. They moved back to Sierra Leone in July together with their 3 american children (2 girls & a boy) who are according to Renee adjusting quite well to being home.

Renee & Modupe are one of those couples that make you want to get married. They are very much in love and function as a unit. Modupe, a business consultant is working with a private equity firm, Manocap in Freetown. While Renee, an equally as able MBA is running OLIMOD Uniform Outfitters, a wholesale and retail uniform business started by Modupe’s mother some 16 years ago. In addition to this, they run a small charity (Leaders of Godly Character – LGC 501 (c) (3)) that currently supports two primary schools and provides scholarships to students who would otherwise find it difficult to afford the most basic educational tools. Modupe also travels through out the country to host free leadership seminars to inspire, educate, and train local Sierra Leoneans.

My entire crew fell in love with the TPs and we are so happy that they have come back to Sierra Leone. If the future of Sierra Leone is left to Renee & Modupe alone they will “create 20,000 jobs in the next 10 years”. Olimod Uniform Outfitters…returnee owned & operated. Most certainly and without a doubt, Sierra Leonean and Proud.