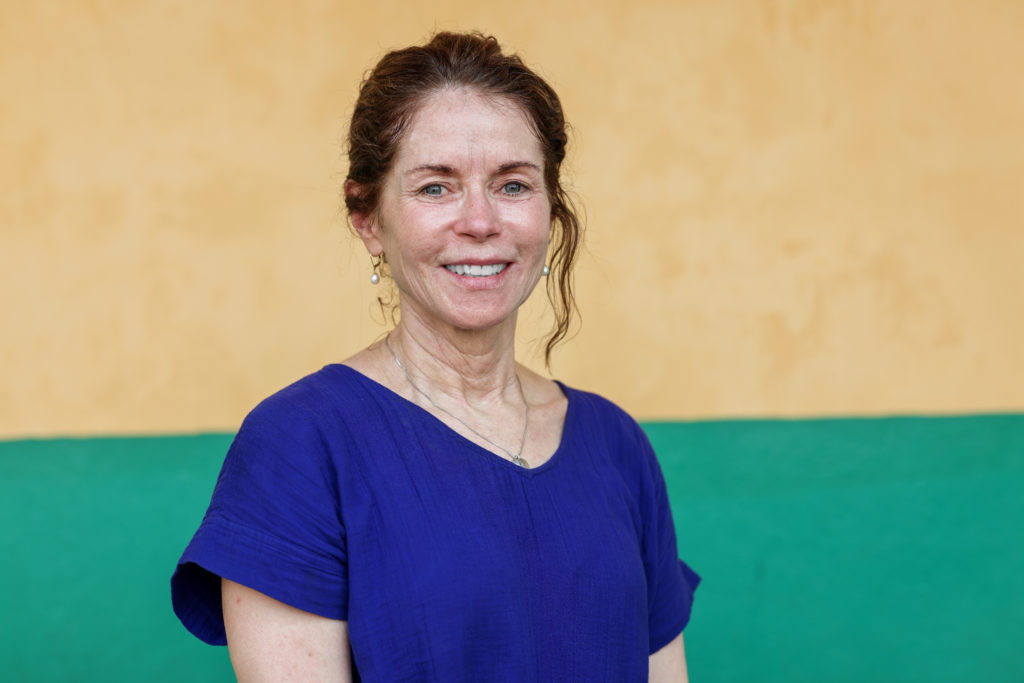 Peace Corps volunteers serve for two years and return to the US, but not Cindy Nofziger. After arriving in Sierra Leone from Maryland in 1984, her commitment to grassroots development in the West African nation continues to this day.

Cindy has built 42 school buildings and three libraries and provided thousands of scholarships to children from low-income communities.

In 2005 Cindy returned to Masanga, Northern Sierra Leone (the first time it was possible to do so since the end of the decade-long civil war), where she had worked as a volunteer at the district leprosy hospital. While there, she reconnected with John Sesay, an old friend from the 80s.

The war had rolled back all educational gains. Rural communities like Masanga were the worst hit. Schools were destroyed, or they just hadn’t been built.

John asked Cindy to help build a community school, and Schools for Salone was born. Since then, SfS has expanded access to education through partnerships with Programme for Children, The Learning Foundation, and Uman Tok.

SfS has scaled to three regions, including the Western Area and Northern and Southern Provinces. They don’t just build structures and leave; Sfs monitors performance and supports teacher training.

What started as one woman’s act of service is now a mission shared by a dedicated community of Americans and Sierra Leonean supporters and board members. Cindy inspires all who meet her.

In April, she cut the ribbon on school building number 42, funded by the Mona Foundation and LA-based attorney and board member Perry Roshan-Zamir.

Before the school was built in Masosingbi, students walked four miles to get to class, a journey that became more treacherous during the rains. The new Sfs school in Mososingbi means relief and access to quality education for students.

This September, Schools for Salone will host its annual fundraising gala in Seattle, Washington, to share its impact with donors and secure more funding to develop education. On average, it costs $50,000 to build and equip a school. Teacher training and certification costs $300 a year; the same amount covers a full scholarship for one child.

For every dollar donated to SfS, $0.80 goes to build more schools, train more teachers, and give the gift of learning to a child in need. The rest is spent on fundraising, communications, and administration.
Cindy has shown that one person can make a difference. Schools for Salone is inviting individual donors and corporate sponsors to join the campaign to expand Sierra Leone’s education access by making a gift to build a school, train a teacher, or a child’s scholarship. Donations can be made on schoolsforsalone.org.