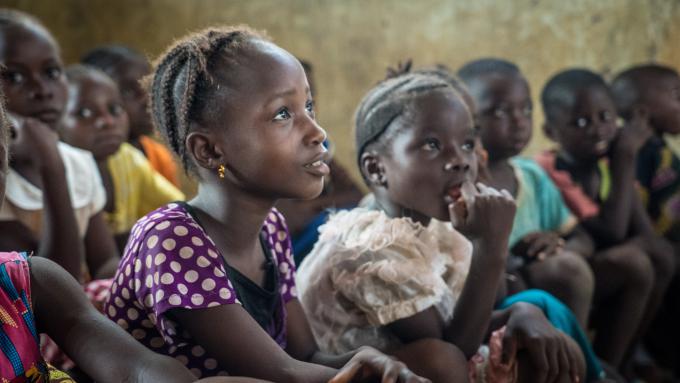 Childhood is a time of innocence, but there are no innocent girls in Sierra Leone: Gal pikin im smol wan no de.

This idiom captures cultural values and perceptions about girlhood in Sierra Leone. It fuels harmful practices against girls that make them victims of sexual violence, underage pregnancy, and child marriage.

In our country, we do not differentiate between girls and women. As long a girl has made the rite of passage into womanhood, the girl is a woman; age doesn’t matter. Unlike boys, society sees girls as adults capable of seduction and sexual deviance.

We say we don’t have “small girls” because we believe that girls are fit for anything–specifically anything of a sexual nature.

Because of this gender-biased belief, Sierra Leone has the 19th highest child marriage rate globally, with 13% of girls married by the age of 15 and 39% by the age of 18. One out of every three girls between the age of 15-19 is either pregnant or has had a child. Two out of every ten girls have had sex with a man at least ten years older.

We deny girls their innocence and use them all the while denying  them empathy once they are girl moms. A majority of Sierra Leonean girls grow up hearing that girls are not innocent. Girls (especially those in single-parent households or foster care) take on womanly roles because that is the only path offered to them.

Every year for Day of The Girl, I post quotes, posters, and themes, but this year it was harder to do since I visited three girl moms in Moyamba, Southern Sierra Leone. Their lived experiences require that we all do more to safeguard girl moms like them.

Lumbe, Lucy, and Janet are 21, 19, and 18, respectively. They are in junior secondary school (the10th grade). Had it not been for childcare services and psychosocial support from an NGO founded by a woman who had been a girl mom, they would be out-of-school.

Across Sierra Leone, girls have less access to learning opportunities, and they are more likely to drop out of school.

According to Save The Children, persistent gender gaps exist at all levels of education; 68% of boys complete primary school versus 55% of girls, and 47% of boys complete lower secondary level versus only 29% of girls. Five out every ten girls 15-24 years old are illiterate, compared to three out of ten boys.

And yet the girls I met in Moyamba say that education is the only way they can become whatever they dream.

Until legal punitive action against those who rob girls of their innocence by making them child brides and girl moms becomes the norm, we must prioritize the girl victims.

While we identify girls at risk for pregnancy (and reduce their vulnerabilities), we must create programs that support girls from healthy pregnancy through to delivery, and for the first five years of their child’s life. Safeguard girls’ health during and after pregnancy, their babies, and connect them with the resources they need to gain education and skills.

Pregnant girls need targeted programs that connect them to prenatal care. Direct cash payments to girl moms who make antenatal visits will safeguard them and their babies. Hospitals and maternal health centers must be non-judgemental safe spaces where caregivers do not stigmatize girl moms but make them feel welcome to come again.

As girl moms rebuild their lives, either as single mothers are child brides, they will continue to need psychosocial support, skills training, and a pathway back to formal education.

What I learned in Moyamba from girl moms is that they could not have re-enrolled in school without safe spaces for them to leave their children. One way to give girl moms a pathway back to school is for government junior secondary schools to provide onsite daycare services in high teen pregnancy regions like Moyamba and Pujehun. With their children nearby, girl moms will feel psychologically safe to re-enroll in school and learn. This pro-girl mom innovation will enshrine the March 2020 government policy that welcomed pregnant girls and girl moms back to school.

While the girls I met in Moyamba were able to transition to JSS and formal education should be the goal, girl moms need options. Some girl moms may not feel safe to return to classrooms with girls half their age–they’ll need adult literacy classes, skills and business training, and access to micro-grants to launch start-ups.

In Southern Sierra Leone, two Save The Children projects offer both married and single girl moms skills and a formal education pathway. The Right to Be a Girl creates safe spaces for teen moms offering counseling, skills training, and resources learning spaces that get out-of-schoolers ready to re-enrol. Since 2018, Save The Children has reached 762 vulnerable and at-risk girls at last-mile riverine communities in Pujehun District.

The Accelerated Education Project (AEP) launched in 2016, enrolled 720 out of school boys and girls into a condensed primary school curriculum of three instead of six years. In the 2018-2019 academic year, 197 students in that program (109 girls, 88 boys) took the National Primary School Exam with a 95% pass rate. This year 348 students took the exams with an 89.5% pass rate. The top three scorers from the AEP students were girls—the same as nationwide.

In the three years of the AEP, 419 out of 717 out-of-school boys and girls were able to transition to junior secondary school. All of them were overage learners–proof that children can and do learn when they have the support and resources.

With one out of every three Sierra Leonean girls living as mothers, we must have a girl-mom-centered approach to all health and education service delivery nationwide especially given the increased risks girls face during the pandemic.

When we say gal pikin smol wan no de–we deny girls’ innocence–we take away their right to be children. Undoing that injustice means we must restore the human rights and dignity of girl moms with programs that offer them opportunities to thrive so that no girl is left behind.

Tags: Save The Children Vickie Remoe