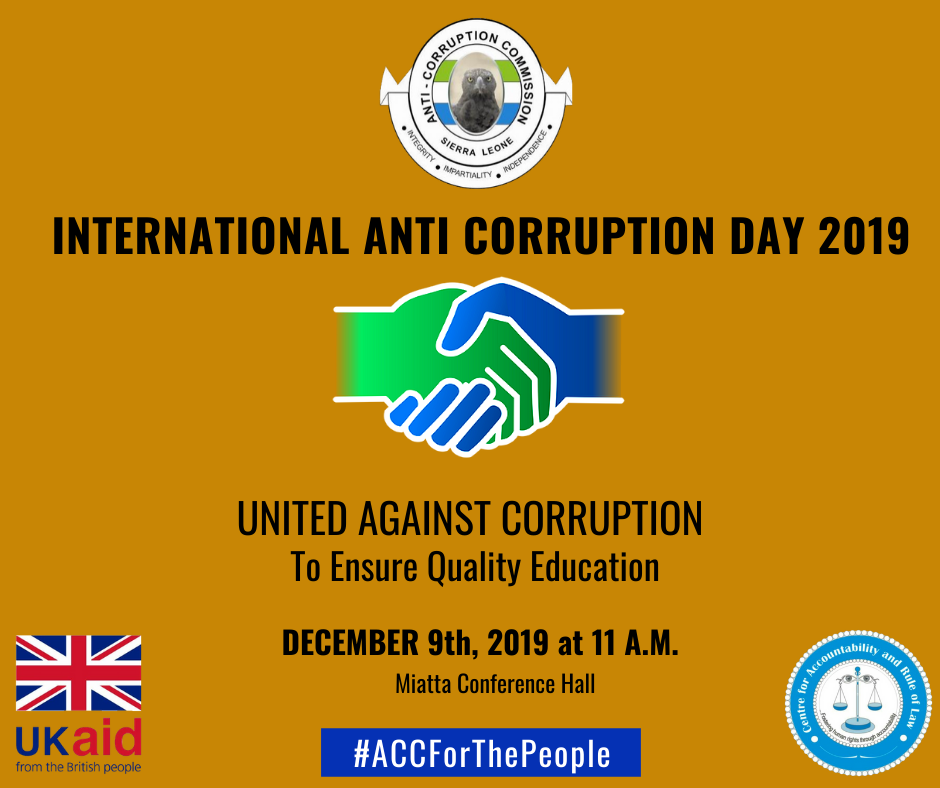 FREETOWN — December 9 is celebrated annually as UN International Anti-Corruption Day. This year, Sierra Leone’s Anti-Corruption Commission (ACC) will hold a public symposium on corruption and sustainable development and an interfaith prayer session to reflect on the role and impact of faith and religion in the fight against corruption.

International Anti-Corruption Day events are being held to educate the public and policymakers about the collective national responsibility to fight corruption. Sierra Leone has made significant strides in the past 18 months. Public perception of the ACC’s work is at an all-time high. On the country’s score in the ‘Control of Corruption’ Indicator on the Millenium Challenge Corporation (MCC) Scorecard, Sierra Leone moved up from 71 percent in 2018 to 79 percent in 2019. Sierra Leone is now amongst the top 10 performers in our income category, second in West Africa and first in the Mano River Union, making a total of 30 percent up from 2018 to 2019.

ACC Sierra Leone, in partnership with the Centre for Accountability and the Rule  (CARL) and supported by UKAID, will host Interfaith prayers for the fight against corruption on Saturday, December 7, at the park on Independence Avenue at the Cotton Tree (Opposite the National Museum). On Monday 9 December 2019 International Anti-Corruption Day, a panel discussion will be held on the theme “United Against Corruption To Ensure Quality Education” at the Miatta Conference Hall in Freetown.

“This year alone, the ACC has investigated 5 cases of corruption malpractice in education from among the 160 other cases nationally,” said Mr. Patrick Sandi, Director of Public Education and Outreach.

An estimated 75 million people in Sub-Saharan Africa have paid bribes to escape punishment by police or courts while others pay to get access to essential services.

In 2003 during the passage of the United Nations Convention against Corruption, the assembly chose December 9 as International Anti-Corruption Day to raise awareness about corruption globally and of the role the Convention in the fighting and stopping it.

“Corruption begets more corruption and fosters a corrosive culture of impunity. The United Nations Convention against Corruption is among our primary tools for advancing the fight. Sustainable Development Goal 16 and its targets also offer a template for action.” UN Secretary-General, António Guterres.

The week-long celebrations serve as a reminder to all citizens to unite against corruption so Sierra Leone achieves its human capital and national development goals.