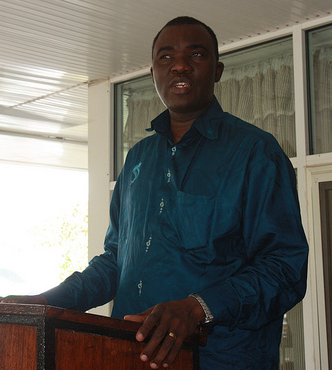 The office of the president of Sierra Leone has announced that Dr. Richard Conteh has been relieved of his duties as Chief of Staff pending investigations over unauthorised mining and timber deals. Before taking up his post as Chief of Staff Dr. Conteh was a deputy minister of finance and economic development.  While at the Ministry of Finance Dr. Conteh had allegedly bypassed procurement policy to award a $9.3 million contract for GST receipts to a Ghanaian company. Anti-corruption had opened a file on the case, but Dr. Conteh was never indicted.

“IT HAS COME TO THE ATTENTION OF HIS EXCELLENCY THE PRESIDENT THAT DR. RICHARD KONTEH, CHIEF OF STAFF IN THE OFFICE OF THE PRESIDENT WAS NOT OPEN AND TRANSPARENT IN THE CONDUCT OF OFFICIAL NEGOTIATIONS FOR A MINING AGREEMENT WITH A PRIVATE SECTOR OPERATOR, THEREBY VIOLATING ESTABLISHED POLICY, UNDERMINING EXISTING INSTITUTIONAL ARRANGEMENTS, AND EXPOSING GOVERNMENT TO POTENTIAL LOSS OF REVENUE.

IN ANOTHER MATTER INVOLVING THE ILLEGAL EXPORT OF TIMBER FROM SIERRA LEONE, THE SIERRA LEONE POLICE ARE INVESTIGATING AN UNAUTHORISED EXECUTIVE ORDER ALLEGEDLY ISSUED BY DR. KONTEH GRANTING AN OPEN-ENDED MANDATE TO THE TIMBER HARVESTERS, PROCESSORS AND EXPORTERS (SL) LTD TO UNDERTAKE THE EXPORT OF AN UNLIMITED QUANTITY OF VALUE-ADDED PROCESSED TIMBER, IN DIRECT CONTRAVENTION OF THE APPROVAL GRANTED BY HIS EXCELLENCY THE PRESIDENT FOR A FIXED QUANTITY OF 30 CONTAINERS ONLY.

AGAINST THIS BACKGROUND, HIS EXCELLENCY THE PRESIDENT HAS DECIDED TO RELIEVE DR. KONTEH OF HIS DUTIES WITH IMMEDIATE EFFECT WHILE THE POLICE CONTINUE WITH THEIR INVESTIGATIONS.”

No justice for victims of police violence at...