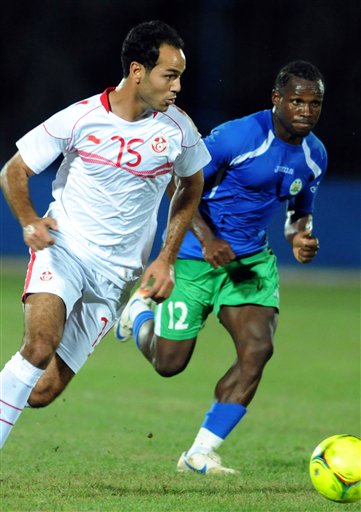 Over the weekend Sierra Leone and Liberia’s National Football Teams played away matches in Tunisia and Nigeria consecutively in a final attempt to qualify for the 2013 African Cup of Nations in South Africa. Sierra Leone played a strong game, even after they lost one man to a red card. The referee also disallowed two goals scored against the home side leaving many Sierra Leonean fans to comment that he clearly was the 12th man on the Tunisian side.

The Liberians had a difficult time in Nigeria as the Super Eagles came back in a huge way. They beat the Lone Stars by 6 goals to 1 disproving recent doubts that the Super Eagles’ wonder years were gone. Perhaps they’ll go all the way to win the trophy this time around.

From West Africa others to qualify for AFCON 2013 include Cape Verde who triumphed over the lions of Cameroon, and Ivory Coast led by Didier Drogba.

Although Sierra Leone versus Tunisia ended in a goalless draw, the Tunisians qualified on aggregate. They scored two away goals when back in September.