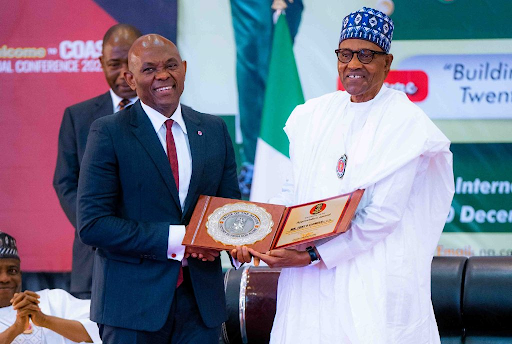 Nigerian Billionaire economist and philanthropist, Tony O. Elumelu, CFR has been awarded the ECOWAS Prize for Excellence. Elumelu won the Deserving Citizens of the Community Award in recognition of his rich contribution to the development of the private sector, his philanthropic activities, and his support for African entrepreneurship, leading to wealth and job creation in the region.

The award was presented to him by the President of Guinea Bissau and Chairman of the ECOWAS Authority of Heads of State, H.E. Umar Sissoko Embalo, at the 62nd Ordinary Session of the Authority of  ECOWAS Heads of States, held on December 4 in Abuja, Nigeria.

The ECOWAS Prize for Excellence seeks to recognize excellence and honor individuals or legal entities who, through their activities, initiatives, creativity, and service have immensely contributed to regional integration, peace, and socio-economic development in the ECOWAS region.

Elumelu is the chairman of Heirs Holdings, a family investment company committed to improving lives and transforming Africa, United Bank for Africa, a Pan-African financial services institution with a global footprint, and several other investments.

He said in a tweet, that he was “truly honored by the commendation from the ECOWAS, a pioneer for breaking down economic barriers, and driving regional development.”

He was also honored with another award on the 5th of December 2022, by the President of Nigeria, H.E. Muhammadu Buhari, GCFR, at the opening ceremony of the Chief of Army Staff (COAS) Annual Conference held at the Sokoto International Conference Centre. This award was in recognition of the support of the Tony Elumelu Foundation, through its partnership with the Arab Bank for Economic Development for Africa (BADEA), to train, mentor, and support with USD 2,000 in seed capital funding into the businesses of 220 widows, who were wives of Nigerian soldiers who lost their lives fighting to the country’s stability.

Other winners of the Excellence Prize include;

H.E. Sir Dawda Kairaba GCMG of the Gambia received the honorary Award posthumously for Eminent Persons, for his leadership and immense contribution to the promotion of peace in the sub-region and in the world.

Akinwande Oluwole Babatunde Soyinka of Nigeria, popularly known as Wole Soyinka received the award of Science and Technology, Arts and Literature, sub-category Literature (Poetry) for the universal character of his works, their wide dissemination, as well as the legendary and committed character of the nominee worldwide.

Omar Pene of Senegal received the Award of Science and Technology, Arts and Literature, sub-category Arts (Music), for the quality of his music and the educational nature of his songs, which communicated many positive messages about the fight against apartheid, African unity, environmental issues, and children’s right.