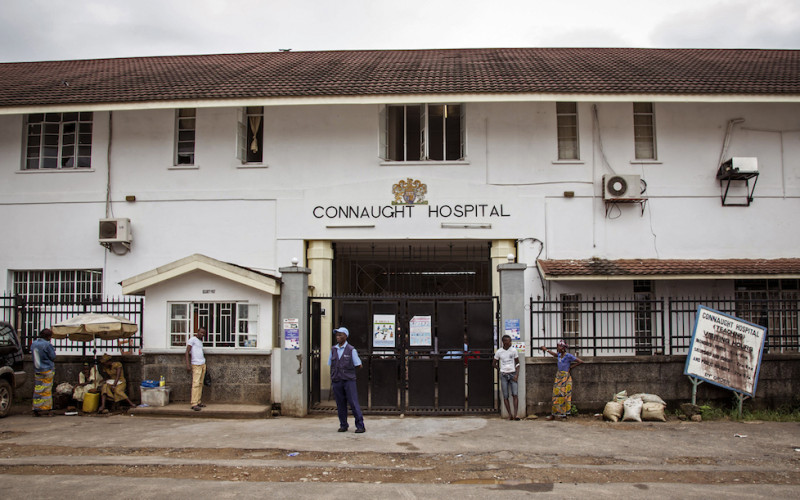 A security guard, center, stands outside the Connaught Hospital, where a leading doctor died from Ebola on Wednesday, in Freetown, Sierra Leone, Friday, Aug. 15, 2014. The Ebola outbreak that has killed more than 1,000 people in West Africa could last another six months, Doctors Without Borders said Friday, and a medical worker acknowledged that the true death toll is unknown. (AP Photo/Michael Duff)

Patients across different hospitals in the country have been left stranded as doctors commence their indefinite strike action over a pay rise and better conditions of service.

According to a report by BBC reporter, Umaru Fofana, after he visited the country’s central hospital – Connaught Hospital, and the Princess Christian Maternity Hospital in Freetown. He met with several people who needed medical attention but couldn’t because the doctors were nowhere to be found.

One of the people he met was an old man who he said was in excruciating pain with his catheter hanging.

“I had an appointment for surgery today but I cannot reach the doctor. I am told he is not on duty because of the strike and he is not answering my calls”, he told BBC’s, Umaru Fofana.

The old man shed tears as he pleaded for the government to intervene or many people will die.

At the PCMH the country’s main maternity hospital, Fofana, met dozens of pregnant women sitting at the antenatal unit, hoping to see a doctor and some did not even know the doctors are on strike. As a result, a woman with obstructed labour lost her baby, but the mother was lucky to survive after the midwives worked very hard.

However, the government has approved a pay rise for the doctors and their weekly 45 liters of fuel entitlement. But the doctors are asking for a backlog payment from May to August and a change in the method of fuel provision. The doctors are demanding the money to be paid into their account and the government says they will provide chits.

The aggrieved medics are scheduled to have a meeting with the country’s Vice President, Dr. Mohamed Juldeh Jalloh today so they can resolve the matter.