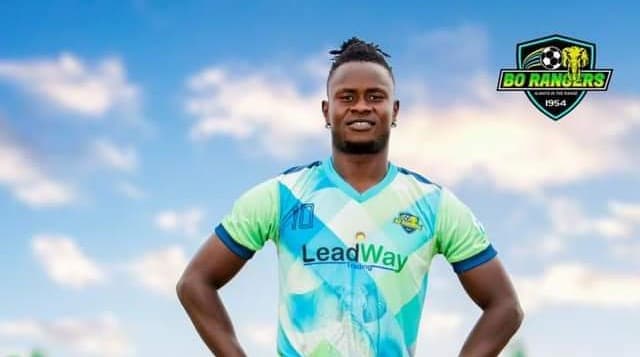 Bo Rangers Football Club has in a press release issued on Friday, July 15, 2022, confirmed that the status of their talisman Musa Noah Kamara (Musa Tombo) has not changed.

Over the past few days there have been social media reports that Kamara has caught the interest of the South African football club, Kaizer Chiefs, and was already on his way to South Africa to secure his contract but the Executive Chairman of Bo Rangers, Babadi Kamara was withholding his passport.

The club emphasized that there has been no point in time when their chairman has withheld the passport of the player and that they have neither received nor been intimated of any interest arising in respect of Kamara from any football team in the world.

They further state that the player is legally contracted to the team and the said contract still exists.

“We want to allay the fears of our fans in particular and the football fraternity in general that Musa Noah Kamara is a player of Bo Rangers Football Club and that his status has not changed,” the club said in their statement.

Kamara, 21, helped Bo Rangers to win the 2021/2022 Sierra Leone Premier League title and was awarded the highest goal scorer in the league after securing 19 goals by the end of the season. He was also part of the squad that represented Sierra Leone at the 2022 Africa Cup of Nations Tournament in Cameroon.

Kamara has been a very popular football figure in Sierra Leone, while playing at the 2022 Nations Cup he scored one vital goal that helped the Leone Stars secure a dramatic draw with Ivory Coast, and also in 2019, he won the country’s Premier League Golden Boot after scoring 15 goals for his side then East End Lions.