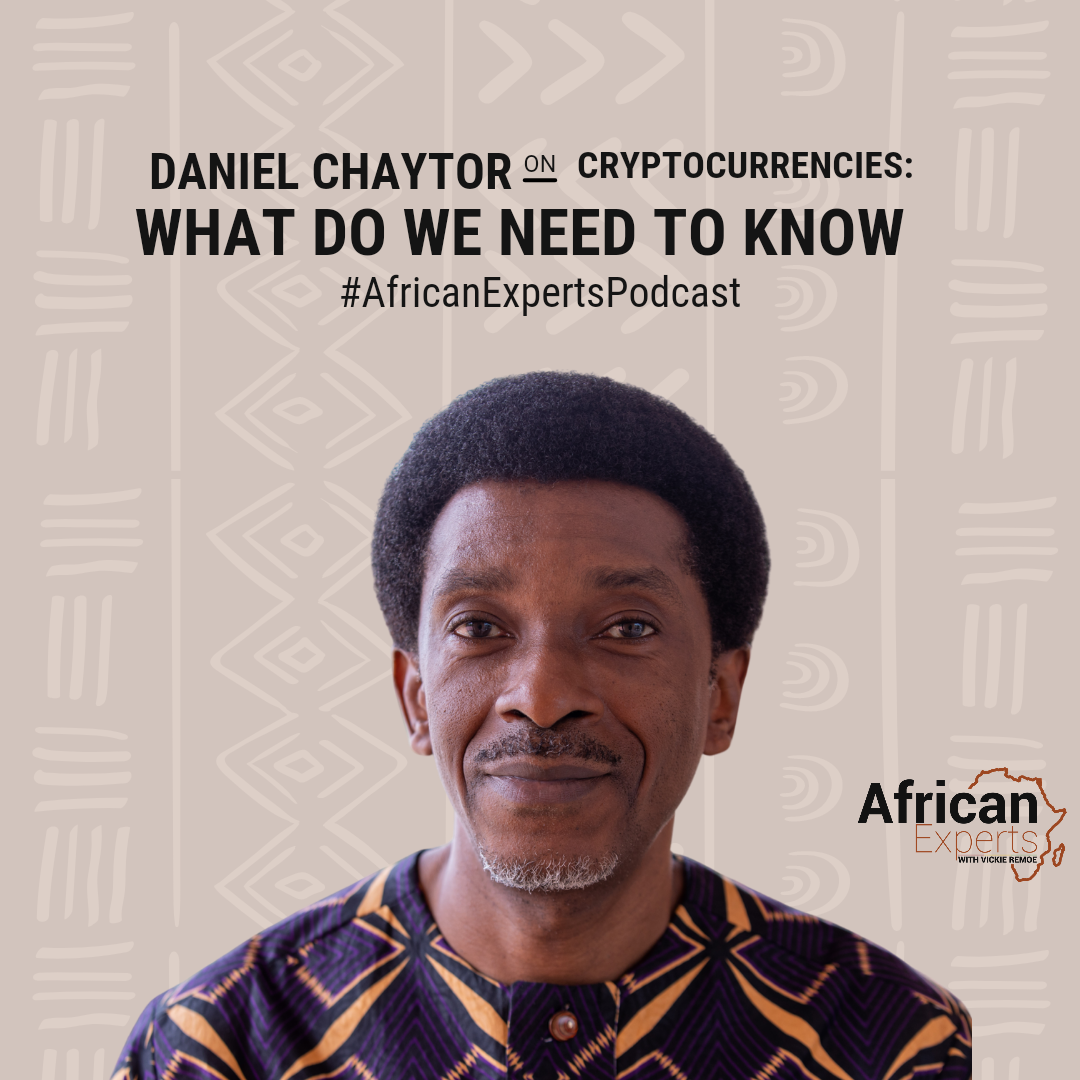 Living in the modern world, technology and innovation are fastly on the rise, with cryptocurrency being the simplest form of FinTech and online money transactions.

While cryptocurrency is a collection of binary data which is designed to work as a medium of exchange as individual coin ownership records are stored in a ledger which is a computerised database using strong cryptography to secure transaction records, to control the creation of additional coins and verify the transfer of coin ownership. Within 12 years, Bitcoin, the world’s first cryptocurrency, is now a multi-billion dollar industry, one bitcoin is worth over USD 59,000.

In the all-new episode of the African Experts Podcast titled “Cryptocurrencies: What Do We Need To Know,” host Vickie Remoe is in conversation with Daniel Chaytor, a Sierra Leonean software developer, ICT policy adviser and cryptocurrency advocate.

Daniel was first asked about how cryptocurrencies came from the fringe (dark web), to become a global FinTech phenomenon today?

According to Daniel, Cryptocurrency wasn’t developed in a vacuum, it was developed as a response to the global financial crash of 2007 & 2008. He continues by saying that to be able to understand cryptocurrency, why and how you must also understand how the traditional money system works, which is something we’re not taught the truth of, traditional architecture of money is not decentralised and it’s based on debt. For example, when you deposit your money in a bank, what you’re doing is loaning the money to the bank by relinquishing some control. So cryptocurrency, Bitcoin changed that, it’s a completely decentralised system, which means there’s no responsible central authority, or that can control it. Also, there is no need to trust a third party, someone can send you money directly, without having to show their identity, without even knowing who you are, without knowing where you are geographically located, and the network doesn’t need to know, it doesn’t care what the amount is, who you’re sending it to who they are, and where they’re located. So one of the main reasons why it has become such a big phenomenon, is the fact that it replaces the need for centralised control, and it gives them the freedom to innovate because it is open, it is permissionless, and it is borderless wherein anybody can participate.

“If you wanted to send money to somebody in a different country you can send them without having to go to a bank, without having to trust any centralised party. So, that freedom to transfer value, to communicate value, to innovate, and to build new financial products on top of a decentralised protocol is what has made the value. People recognise the value in the system, and have as needed to become so popular,” said Daniel.

He was further asked how/why does cryptocurrency is potentially cheaper to send remittances than that of the traditional money transfer system, where 7 to 10 per cent of the money an individual wants to send goes to the organisation that they are using to send it for them?

Daniel responds that this mainly has to deal with the centralization of the traditional money transfer system when someone tries to send money using services like Western Union, there is a lot of bureaucracy involved. But if someone wants to send money using Swift, where the money is already in a digital form and that shouldn’t take three to 5 business days for the recipient to receive his or her money. So for crypto, it’s a worldwide decentralised network, the only reason why they collect fees is because of the game’s theoretical consensus that needs to be on, for the network to maintain its decentralisation.

The conversation moved on to whether there is a global divide in crypto exchange, for example, if all cryptos are made equal and if all the consumers are positioned to benefit equally?

Daniel started by saying well that’s not the case, crypto is completely neutral, that’s one of its properties, it doesn’t care who you are, where you are from, it also doesn’t care about the size of your transaction, everything is treated equally. When someone creates a cryptocurrency if he/she has a node or several nodes on the network, all the nodes are equally important to the network. The only possible divide one might say is perhaps the area of mining because mining determines how blocks are created, and who is responsible for issuing them.

Learn about cryptocurrency and how it works by listening to the podcast now: