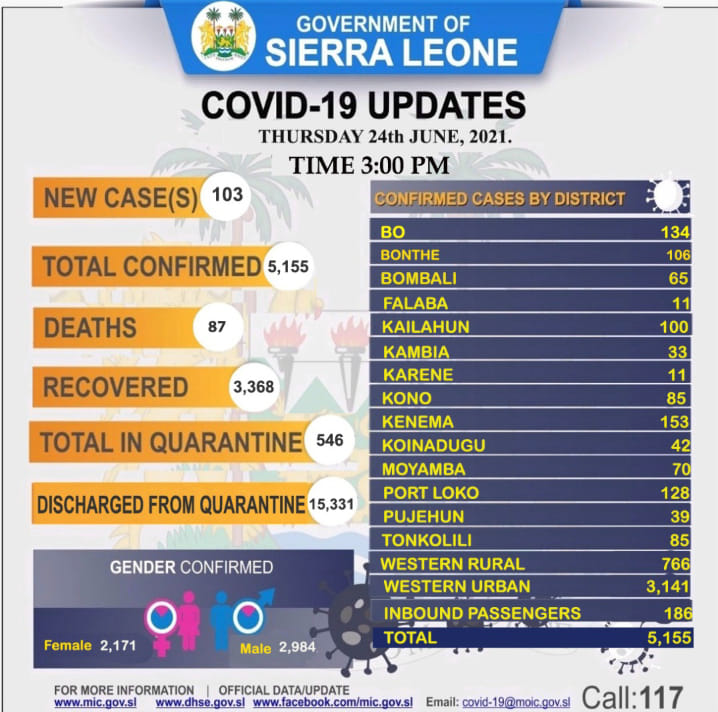 Sierra Leone is now experiencing a 3rd Wave of cases of Covid-19 in the country; Cases have increased exponentially. According to the National Covid-19 Virus  Emergency Response Center {NACOVERC}, in less than one month, there have been over 900 brand new cases of Covid-19 and most of these positive cases in the ongoing 3rd wave, are presenting with symptoms. The 900 cases have been recorded from May 25th to June 23rd 2021. There has also been an increase in patients dying from the disease.

At the High Court in Bo, 21 students were set free after their sentence and conviction were quashed by Justice Ganda following the granting of an application by the Legal Aid Counsel for the Southern Region, Kabbah Sei Coomber. On the 28th May 2021, the students were arrested on allegations of Frequenting a place used for smoking Cannabis Sativa contrary to Section 49 [1] of the Pharmacy and Drugs Act 2001 and Loitering contrary to Section 7 of the Public Order Act 1965.

The Deputy Minister of Information and Communications who doubles as Spokesperson of NaCOVERC, Solomon Jamiru has said in Freetown that the Indian variant or Delta virus has landed in Sierra Leone. He described the virus as very aggressive. He disclosed that the virus was found in the samples of two females but could not identify whether they are inbound passengers. He called on the people to one hundred percent rely on the health care system in the country.