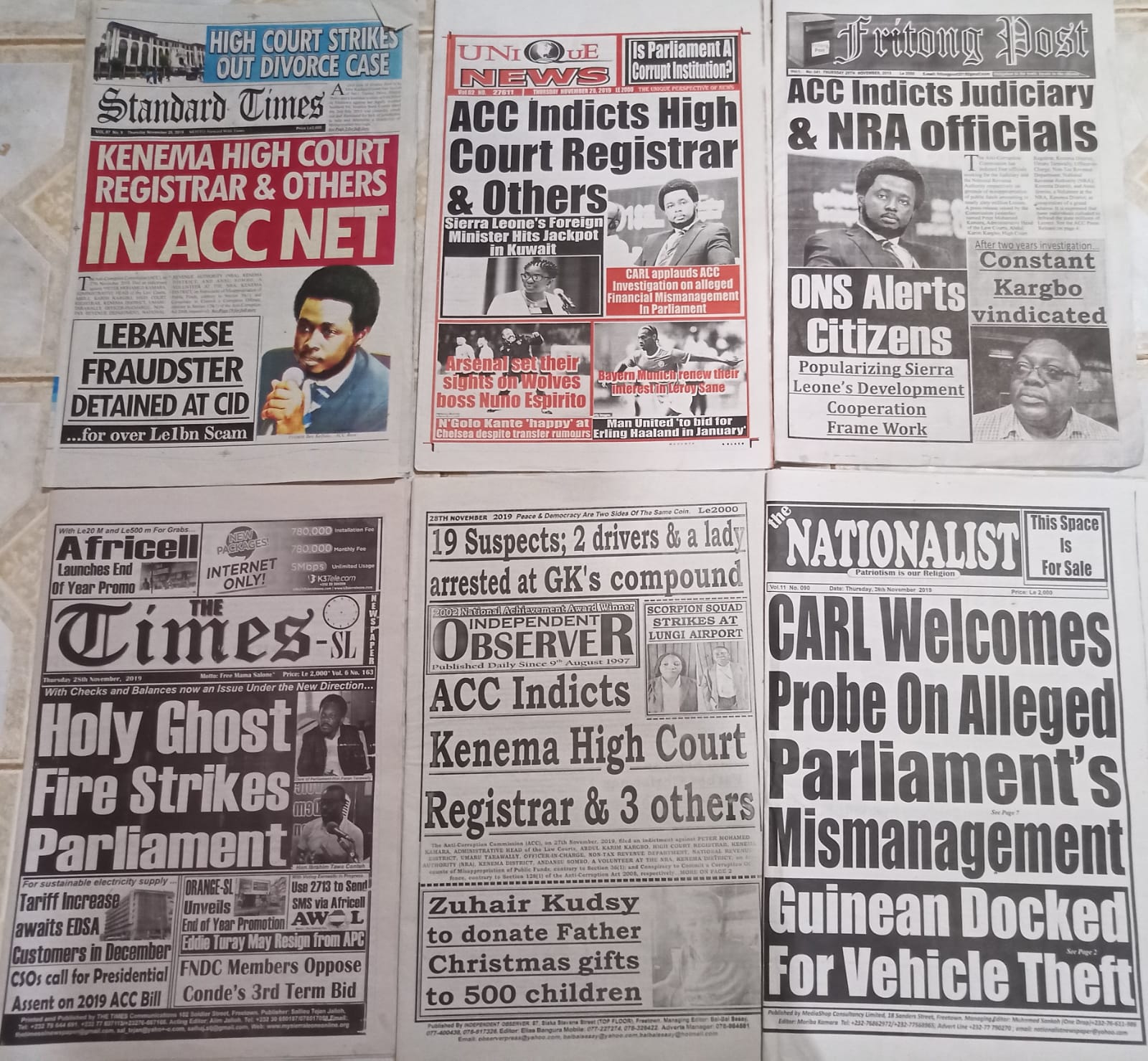 Officials in Sierra Leone accused of stealing $5994 of $6000 and leaving just $6 for the government.

The ACC filed an indictment against three public officials in Kenema namely; Peter Mohammed Kamara, Abdul Karim Kargbo, Umaru Tarawalie, and a volunteer Ansu Sombo for misappropriating Le 59,940,000 of 60 million ($6000) that was paid to the government in the fines. The trio only paid 60,000 ($6) of the $6000 of public funds between March-September 2019. The monies stolen were court fines paid by Mathew Sesay and Abu Bakarr Sidique Turay who were found guilty of corruption by a high court in Kenema.

Two Parliamentarians in the same political party says there is corruption in the Sierra Leone Parliament.

The current clerk of Parliament Hon.. Umaru Paran Tarawalie and Ibrahim Tawa Conteh, have both said that there is corruption taking place in the Sierra Leone’s house of laws. What makes this claim shocking is the fact that the two MPs belong to the ruling Sierra Leone People’s Party (SLPP), so these allegations are hard to dismiss as ‘politics as usual’. The Clerk of Parliament, Hon. Tarawalie says the only reason why Hon. Tawa’s is going on about corruption is because the latter has lost the favors of Speaker of the House. Word is that selection for parliament committees depends on whether or not an MPs is on good terms with the Speaker and Leader of government business in parliament. Both MPs have been invited to the Anti Corruption Commission to support investigations around their claims.

Sufian Kalokoh who plays for Sierra Leone’s Under 20 Football team gave Sierra Leone a 3-1 lead in a qualifying match against Mauritania for the West African Football Union( WAFU) Semifinals. Kalokoh was named man of the match after the game for the hat trick. For SL U-20 team to reach the semi final they must beat Guinea on Friday 29 November 2019.

Entertainment lovers in SL are excited to witness the long awaited Ecofest musical show which will take place Saturday. After experiencing the wonderful outcome of the 2018 Ecofest with a turnout of 30,000 fans, Sierra Leoneans all around the country are super excited to witness performances of famous artists like Kwame Eugene, Diamond, Comedian Basket mouth. The information fans have is that some of the guest artists have started arriving, has stored the anxiety all around the country.