US-Based artist Ansumana Kai Kai (stage name “Kai”) brought LAJ, and Kao together and it surprised music lovers who have known Black Leo, and Red Flag Movement to always be at odds.

“Fit Yai Corner” first released online without much said by either Kao and Laj sparked listerners’ curiousity, how is it that these two are on one song? 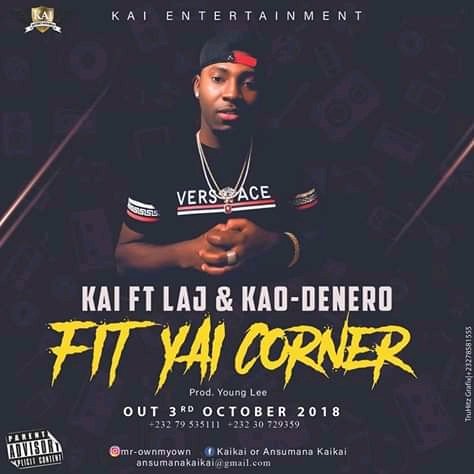 As a way of getting clarity this platform contacted the owner of the song to get his view why he did such collaborations.

“As a Sierra Leonean who wish to see Sierra Leone’s entertainment industry to another level so i decided that such collaborations will help to achieve such goal, by bringing this two guys in one song, for which that will serve as a way of uniting the two, if possible they will do an album, tour round Sierra Leone and other countries, other people will also get the courage to collaborate with both them, i learnt a lot of experience, from the start of the song to the video and i will make use of the lesson learnt. Finally am calling on all Sierra Leoneans home and abroad to join hands together to push the music entertainment industry and to be in mind that the Fit Yai Corner video must reach 1million views on YouTube which is a huge credit to the country’s entertainment industry, but all that will happen if Sierra Leoneans unite and if internet service providers to provides affordable, speedy and durable internet.” – Kai

Sierra Leone: Any FGM ban must cover all girls and women, Bondo has no ‘informed consent’

President gives in to religious pressure, refuses to...