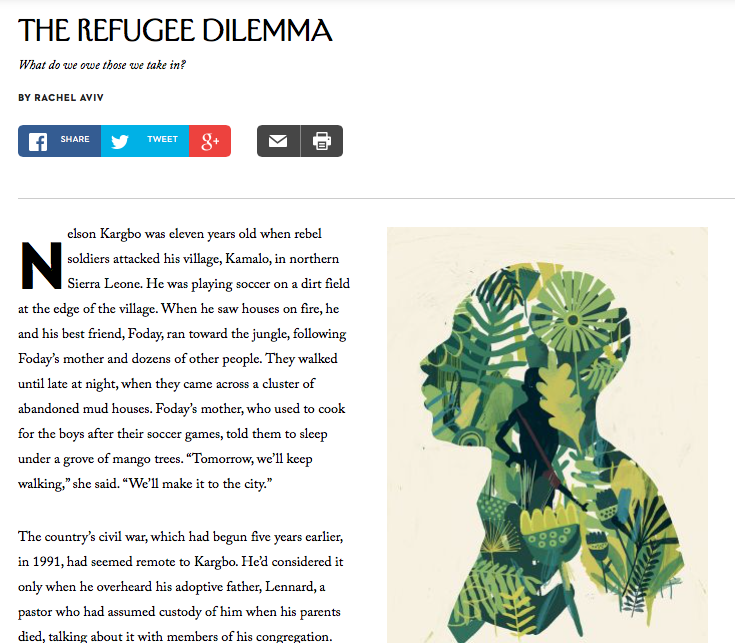 The New Yorker just published a story about a Sierra Leonean man who was granted refugee status in the US as a teenager after having been a child soldier. Nelson Kargbo was held for two years without bail awaiting deportation from the US although he had a green card. He was arrested for domestic violence and under a law that allows deportation even if you’re a permanent resident, he was held to be sent back to a country where he had not been for over a decade. At the time of his arrest he had already fathered 4 children,he had a job, although suffering from undiagnosed PTSD.

The story of Nelson Kargbo is a heart breaking head aching long read about how easy it is to fall between the cracks of America’s judicial system, and how little protection refugees in the US actually have even after having been granted permanent residence. It is also a story about the still very real, and deep scars and wounds left on Sierra Leoneans almost 13 years after the end of the 1991-2001 civil war.

An except from the New Yorker ‘The Rights of Refugees, Refugee Dilemma: What do we owe people we take in’ by Rachel Aviv:

“The staff at the jail initially wrote that they found Kargbo “pleasant,” “sociable,” and “personable.” But a few days after the judge ordered him deported Kargbo heard voices in Krio that told him, “You don’t deserve to live here,” and “You’re not capable—you’re not worth it.” He covered his ears. He worried that other inmates would think he was crazy if they saw him responding to the voices, so he walked away in order to conduct his conversations in private. It occurred to him that he looked like the Craze Men, as they were called, whom he used to see in his village, gesticulating and talking to themselves. Kids threw rocks at them and beat them with sticks. Some were chained to trees by their families, so that they wouldn’t run away or cause trouble. In his cell, Kargbo told the voices, “Leave me alone, leave me alone,” and then prayed to God to help. When that didn’t work, he imagined that the best way to quiet the voices was to bust his head open. He repeatedly banged his head against the wall.

“Inmates on his unit heard him crying and yelling in his cell, and suggested that he take medication. “I need to see the nurse,” he finally wrote on a request slip that he gave to a guard, but a medical consultation wasn’t provided. He felt that he was being “targeted” by another inmate, who kept walking near him and farting. One day in late December, the inmate followed Kargbo to the jail’s meal cart and asked him if he was ready to fight. Jail officials determined that Kargbo “took an aggressive stance,” with “his chest protruding,” and pushed the man. Kargbo was placed in solitary confinement for twenty-three hours a day; his meals were delivered to him through a slot in the door.”

Two weeks later, guards found him lying on the concrete floor, singing loudly. When asked what he was doing, he explained that he was singing to the floor. “I can’t take this,” he told a nurse. He said that he was overwhelmed by the idea of returning to Sierra Leone and was “hearing voices telling me to hurt myself as the only out.” A nurse evaluated him and gave him a handful of diagnoses: post-traumatic stress disorder, schizophrenia, bipolar disorder, and depression. He was prescribed two antipsychotic drugs, a mood stabilizer, and pills to prevent him from having nightmares. The nurse wrote, “He says he tends to get in a fight if he is stressed out. This has been happening since he has been in high school.””