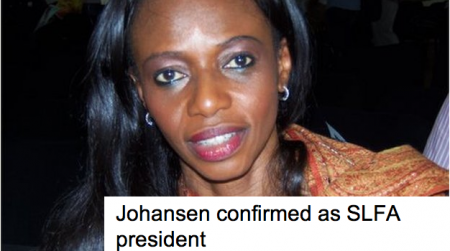 Isha Johansen has become the first woman to head Sierra Leone’s football association, and just the third woman in the world to hold such a post. Johansen who stood unopposed at the elections has called for unity in football. About 40 percent of the association’s delegates boycotted the elections after three of the candidates were disqualified. Just  14 of the 47 SLFA members were at the elective congress which was held at the Kingtom Officers Mess in Freetown.

The normalization committee set up by FIFA disqualified Foday Turay, and  Mohamed Kallon because they failed to meet a 5 year continued residency requirement stipulated in the FAs code while Rodney Michael was disqualified for his affiliation with the sports betting company, Mercury. Kallon threw his name into the ballot at the very last minute and could have been a serious contender for the presidency. The decision to bar the candidates  just days before the elections shocked the local football community but FIFA says that the normalization committee rightly interpreted its code.

In her acceptance speech Johansen said her win was symbolic and one of which she is very proud. She said she needed everyone’s contribution to change the sport for the better.

“As much as we celebrate I want to use this holy month of Ramadan to appeal to my brothers Mohamed Kallon, Rodney Michael and Foday Turay to join me in developing the game we all so love”

Johansen appealed for peace. The campaign for the presidency had many low points including one that falsely accused Lebanese Sierra Leone Rodney Michael of being a member of a terrorist group.

“It is like a football final where there can only be one winner and I have emerges as that winner,” she said.

“This was not a personality fight but a fight to change the face of Sierra Leonean football and we have all won there is no loser.”

Primo Cavaro Head of Football Associations at FIFA said he was satisfied with the process and commended the Normalization Committee whose mandate has now ended.

He congratulated Johansen on behalf of the FIFA President Sepp Blatter and assured her  of their continued support to the Sierra Leone Football Association.

The 48 year-old Chief Executive Officer of  Premier League side F.C Johansen has  joined Burundi’s  Lydia Nsekera to be the two female FAs in the world. No word yet if she will step down as CEO of F.C. Johansen or continue on.

Of the three disqualified candidates of  Michael, Kallon and  Turay, one says that he will seek legal action.

In a telephone interview lawyer Rodney Micheal confirmed that he will be taking court action to ascertain whether the decision of the Normalization Committee to disqualify him was well interpreted.

Leone Stars defeats the Gambia by 2 –...