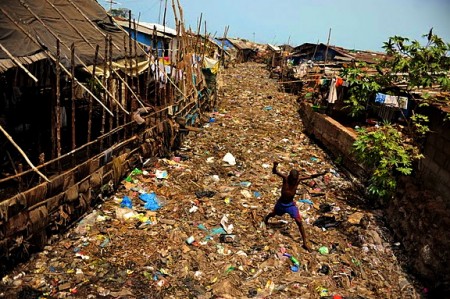 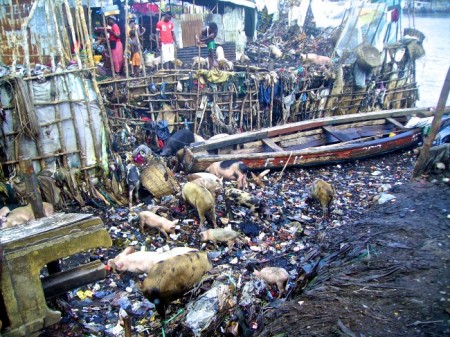 During the months of July and August Freetown records over two feet of rain daily for 27 days however this does not stop the city’s slum residents from reclaiming land further into the sea.

Each year slum dwellers in Kroo Bay and Susan Bay are drowned out by swollen gutters blocked by plastics and human waste that eventually dump out into the wharfs. As they struggle to create more space for their homes, residents are converting sea beds of trash into land.

Dirt and Sticks are used to fence selected areas and raw garbage washed down from the city’s streets fill up the designated area until such a time when water gives way to mix of dirt and solid waste which can then be used as a foundation for ‘pan body’ shacks.

Mohamed Mansaray, the youth chairman of the Susan’s Bay  also known as Big Wharf  says that most of the land now being used by its dwellers was created through this same process.

According to Mansaray Susan’s Bay community which borders the slum of Mabayla Wharf in Central Freetown lacks standard social facilities, such as schools, hospitals and recreational facilities.

When Cholera broke out in Freetown in 2009 he says that residents of  Susan’s Bay suffered the most casualties because of living conditions in the Wharf.

“I was born in this community and though things are now improving than they were before, the government should improve on pipe borne-water supply, and toilet facilities,” he said.

Flooded with garbage, the community branded as unsanitary by environmental campaigners is inhabited by more than 5000 residents.

The Director of Green Scenery, Joseph Rahall, says that they are concerned about environmental degradation, especially the marine ecosystem.

Rahall says efforts must be made to look at the nature and degree of exposure to hazardous materials that wash into the sea.

“Not only do hazardous waste materials flow down into these two communities but marine wildlife in the sea is also threatened”, he says.

In 2008, the current Freetown City Council administration said they would relocate residents of these communities to better areas, but no one has actually moved.

The then Mayor the Freetown, Herbert George Williams, promised to transform the slums into economic centers with malls or markets for traders.

Land at Grafton on the outskirts of the city had reportedly been designated as a suitable relocation site. But residents of the Susan’s Bay say that nothing ever materialised.

Mayor Herbert Williams stepped down from office after he was indicted by the anti-corruption on allegations of misappropriation of funds from several council projects.

Efforts to get a response from the acting Mayor Alhaji Gibril Kanu proved futile, but an official at the council said relocating residents from these two communities is a process and that when the time comes they will take the right action.

The director for the ‘Network Movement for Youth and Children’s welfare in Sierra Leone’, Hajie Bah, said social conditions in all slum communities have deteriorated and will continue to do so as we head to the peak of the rain season.

“It is not that some residents don’t want to reside in better communities but most are unemployed and cannot afford the high rate of rents demanded by house owners,” Bah said.

That’s an Accra boy for you

Sierra Leone: What you need to know about...

The Luxury Of Not Living in Sierra Leone